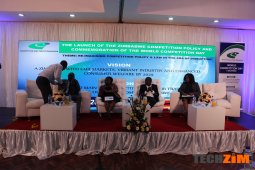 The day we decide to launch a Competition Policy for Zimbabwe is the day we have a huge internet outage, what are the odds???

I’m sure you’re wondering what the connection between the two is, well worry nie, I’ll tell you.

Today being World Competition Day, the Competition and Tariffs Commission (CTC) decided to commemorate the day by launching the first foundational National Competition Policy in Zimbabwe as well as by hosting a workshop around it. What was most interesting to us as Techzim is the theme which the workshop ran under dubbed Re-imagining competition policy and law in the era of disruption… and we wrote the why in this article.

Anyway, I wanna talk more on Competition Policies. A Competition Policy is aimed at creating a ‘level’ playing field which promotes competition. Markets with healthy competition are often characterised by lower prices, diverse choice for consumers and innovation, to mention but a few. Ideally, competition should bring about improved services or products, yes the same way competition helped you produce better grades in primary school is the same way it works for companies/entities.

So now to marry this day to the internet outage that happened in Zimbabwe? Well, turns out there was a problem with just one Internet Access Provider (IAP), a fibre break to be precise. One problem in one company caused the majority of Zimbabweans to be off the internet for a whole 6 hours. By the majority of Zimbabwe I mean all the 75.4% of all mobile internet users which are on Econet, plus the 17% found on NetOne were out.

And by the way, mobile internet makes up to about 98% of all internet users in Zimbabwe… using my quick math that is. Based on the Q2 POTRAZ report, mobile which is 2G/3G/HSDPA/LTE + CDMA (6 527 176 + 33 251 respectively) has 6 560 427 subscribers, over the total number of internet subscribers in Zimbabwe which is 6 668 155 as a percentage makes up 98%. Of course using those subscriber figures might not be the best since when it comes to WiFi connections, one subscription can carter for more than one person, but then again what better way to calculate the percentage given that information?

Anyway point is, all these people’s connection to the internet was disrupted as a result of a fault in one company, Liquid Telecom. Last we checked (POTRAZ report Q2 2017), Liquid Telecom had an 81.4% market share of equipped international internet bandwidth as shown in the figure from the report below.

This no doubt makes Liquid Telecom a monopoly in the industry, not to mention how Internet Service Provider (ISP) such as ZOL rely on it for bandwidth.

As if that’s not enough, TelOne on the other hand, which is the second largest internet provider in Zimbabwe (at 15.1% though) also says it was experiencing a fault too, all on the same day round about the same time! Such an interesting story to look into but we won’t, for now that is since I want to stick to script.

With all that said and done, here’s the point: Had there been some healthy competition, things wouldn’t have turned out so bad. So yes we do need competition and clearly today was a practical example of how relevant a competition policy would be for us as a country, not only in this field but lesson runs across all fields!