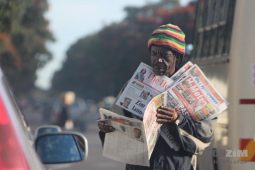 If you read the Zimpapers’ Herald on hard copy you should have noticed the full paged teaser adverts that didn’t seem to make sense until they revealed a made over version of the popular tabloid, H-Metro. The new H-Metro now costs 50c meaning a 50% slash in the price from the $1 it used to be.

This may be good news for those who are already customers of H-Metro but it signals bad news for the publication, the Zimpapers Group, print media and the media industry collectively. This decision shows how media is in crisis.

H-METRO better than ever!

Our content will be richer and meant to address all your concerns as our readers. For a whole year, we sat down with readers from all sectors of society noting their concerns and what they love about our paper.

With better news, in-depth coverage of critical issues, matters of interest to both sexes, your hot gossip, and as usual the best of entertainment and sport coverage on society’s prominent people, the new look H-Metro comes at an unbelievable price of only 50 cents!

The biggest irony of this new look H-Metro is that disparity between the price and improved stories and design. We have the incredible combination of the best paper in the country having the best price.

Now all our readers can afford the paper and there is no need to borrow or share. We will also do our best to make language and content family friendly and there will be no reason not to get a copy.

The futility of lowering the price

The number one instinct for a business in trouble is to lower the price. However, this is hardly the winning play and history proves it. The last thing you want to do when you are facing problems is to lower your margins (profitability) and your cashflow capacity (your business’ lifeblood). Unfortunately almost every business under threat from competition or some other factor chooses to go down this path.

The alternative rarely explored by in trouble businesses is harder. The way out would be to review your business model and change. It requires bravery and feels more risky than to just lower your margin (by 50% in the case of H-Metro).

The gap cannot be covered

H-Metro cannot hope to double their sales in order to get as much sales revenue as they were getting. If they are hoping to get more than that for this to make sense, I will be brutal and tell them right now that it’s not gonna happen.

Another problem is that increasing sales revenue by increasing number of copies sold after a price reduction is near impossible because each additional copy sold has it’s own marginal cost. A 50% reduction in price therefore results in a more than 50% impact to their bottom line.

This is different for digital publications. The marginal cost is almost zero. It doesn’t cost Techzim anything extra really to have an extra reader. This difference is the biggest and underlying shift in most internet based business models.

Maybe their target is advertiser money…

I know clever readers were already screaming that I don’t realise that H-Metro is going for advertiser money after all this is the predominant business model in media and news: money comes from advertising.

How many more readers does H-Metro need to gain for them to be able to increase their advertising rates or attract new advertisers or both?

Unfortunately the readership numbers they need to make such changes to their advertiser revenue will not be achieved. Their problem is not necessarily that H-Metro was too expensive at a dollar (it might have been). Their biggest problem is that H-Metro content is readily and more efficiently supplied by WhatsApp.

H-Metro stormed Zimbabwe when it was launched in September 2009 and became very topical and popular because it exposed us all to the cheesiest and juciest gossip out there. Cheating husbands exposed, witchcraft accusations… all these tickled the gossip itchy ears of Zimbabweans (mostly Harare folks).

9 years later: by the time it comes out in H-Metro you have already seen it on WhatsApp 5 times yesterday. If for some reason there’s a fresh story that never got viral on social media but appears in H-Metro, you know you’re not gonna miss out because your cousin and ten other people in as many groups will share it with you on WhatsApp before the newspaper boy in your area has set up their stall.

Why on earth would you buy the paper now, even if it’s 50c? You already have a WhatsApp bundle that gives you access to all this content and more for just $1 for the whole week!

Part of the changes to H-Metro are changes in content. This confirms that they may be going for advertiser dollars. The very content that made and still makes H-Metro popular is content that advertisers are not too eager to put their brand against.

Firstly, doing their best doesn’t mean anything. Secondly, once they clean up their content they will lose their audience: people already have other options for serious news. This may be the reason why the price is dropping, to retain readers who may otherwise want to leave due to change in content. Bad place to be.

To move away from the gossipy tabloid stuff to whatever they are calling family friendly content it will cost them more. Good journalists have to be paid more and have to be given more time to work on stories. This then makes the decision to cut the price by 50% an even more terrible decision.

It’s not too late for digital

H-Metro resisted online. At some point they were so poor with their Facebook page that someone created a fake one and it got to be more popular than the legit one. H-Metro quit Facebook at that time because they couldn’t compete with the fake account. When online tabloids started stealing content from H-Metro and pasting it online their response was ridiculous.

Instead of making sure they were always first with their own content online, they started delaying publishing stories online. Further they started uploading stories as images and not text. Unfortunately Google crawlers can’t read images hence the pages would not be indexed properly to rank on search.

The content stealers were actually empowered by that move: they simply bought the H-Metro and typed in the stories themselves unto their own platforms. As far as search engines were concerned: the pirates were the owners of the content because the actual owner was not online.

All they need to do is just decide to make H-Metro a strictly online publication optimised for that. They already have a strong brand and resources to be big online. Tabloid content thrives online not in newspaper form.

Yes digital business models for media are still not solved but they will be. I hope H-Metro will embrace digital and be part of those that will solve the sticky business model question.