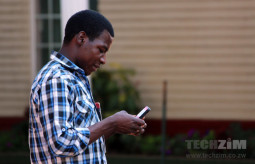 Not so long ago, Android unveiled a new version of their software that was targeted at entry-level phones. With sales slowing down in most developed countries, it seems that Google (the creator of Android) is now focusing on developing markets that have cheaper phones.

They announced Android Go in Q1 of this year and since then a number of low-cost devices have been announced, i.e the $99 Alcatel X1, the $109 Asus ZenFone Live, and the $70 ZTE Tempo Go among many others.

These phones come with a custom version of Android that is tailored for devices with weaker hardware specifications and because this is the case these phones are supposed to appeal to smartphone users who don’t care about the bells and whistles or first time smartphone owners who are not too particular about what device they get.

If you live in Zim, you know that these devices are perfect for a lot of people, as there’s a sizeable number of individuals who just need a phone that can access WhatsApp. To hell with the camera, screen resolution, processor or anything else. So, will these phones actually gain traction in local market? Well, I don’t think they will and primarily because of one factor…

Apart from the ZTE Tempo Go which costs $70, by the time you add duty costs and the markups that will be added on Android Go device they won’t be so cheap once they land on our shores. With used smartphones that can access WhatsApp starting from as low as $30, people in Android Go’s target market don’t seem to prioritise how new a device is. The priority is price and whether the phone can get a job done. If that’s the case, why buy a phone that costs $70 when I can buy one for $35. I know some will argue for battery life, and things like software updates and security but for the person buying in this market that’s never a priority.

Ever heard of Kai OS?

Kai OS is a relatively new operating system that runs on budget phones. Kai OS is made for feature phones or the phones popularly known as mbudzi here and it makes these phones relatively smart. With Wi-Fi, 4G capabilities and the ability to run some pretty cool apps such as the Google Assistant, Facebook, Twitter, YouTube and most importantly WhatsApp Kai OS seems destined to take over the budget market.

In 2017, over 40 million phones with Kai OS were sold and by the end of the year Kai OS had over taken iOS in terms of market share in India.

Kai OS runs phones that don’t require touchscreens, have as low as 256 MB of storage a far cry compared to Android phones. Popular devices running Kai OS include the Jio Phone and Nokia 8110 (Banana phone) -though these two devices have 512 Mb RAM. What this results in is prices far lower than those of Android competitors. In India the Jio phone is given away by Jio (who also happen to be a mobile network operator) as part of their contract plan. The phone costs around $20 (which is refundable after a certain period). TechAltar –a YouTuber- explained it perfectly:

Where does this leave Google and Android Go?

Well, Google knows the threat posed by Kai OS – in fact they invested $22 million in the company. Android Go on the other hand, won’t be a smash hit. If Google persists with it, it will only get to Zim the same way budget smartphones have been getting here all along. As used, cheap second hand options that have depreciated greatly in value.

Update: We inaccurately stated that the Nokia 8110 and Jio Phone have 256 Mb RAM when in fact both phones run at 512 Mb. Kai OS can, however, work on devices with 256Mb RAM.

One thought on “Android Go Was Made For Countries Like Zim, But It Might Never Get A Chance To Shine”