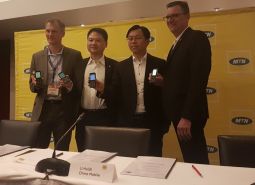 Why MTN is introducing a smart feature phone

One may ask, why MTN has chosen to venture into this? MTN says it has 150 million customers that are still using feature phones. So this smart feature could just be the spark (more like a bridge) that will induce many Africans to migrate from feature phones (with only voice and text capabilities) to smartphones (with only voice and text, apps and media capabilities) as they will get a glimpse of the attractive functionalities of what a ‘whole’ smartphone offers.

The phone also comes with a 2,000mAh battery, which is said to provide up to two weeks of standby time and 2-5 days of life under average usage. Other features are;

I think where this smart feature phone will win it is its selling price. The phone will sell for a retail price of $20 (Rand 290) which I believe is quite affordable to many people in Africa.

However, people may not be drawn to it because the phone doesn’t yet support the WhatsApp app. And it’s this app that many people in Africa migrated to smartphones because it is cheaper to communicate using it the WhatsApp app). Accordingly, MTN’s smart feature will have to support WhatsApp if its ever to stand a chance to win over people’s hearts. But since this smart feature phone is going to be on the shelves early next year, WhatsApp could, by that time, be supported on it.