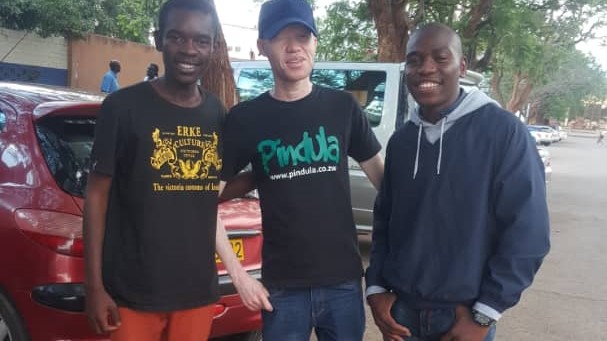 Image: The founders of StudyMate: Rigney on the right and Justine on the left with Tinashe of Techzim

In 2016 Rigney Muterisi then a lower sixth student got frustrated by how he had to share a single textbook with 7 other students! This meant each student would only get access to a textbook a few times a month. However assignments, daily exercises and tests don’t just come twice a month, they keep pouring almost everyday in all directions. More importantly, learning must be a daily exercise whether there is a test or not on the horizon.

Rigney decided to validate whether this was a common problem and he discovered it was. He found 17 other schools around Bulawayo that had similar resource constraints. After his little research, Rigney decided to work on a solution.

The first thing that came to mind was that he would build an app, a platform where students and teachers would interact and get access to resources. The app would be called StudyMate. An app was not as easy a solution as he had imagined. Here is Rigney in his own words:

The situation on the ground was different however. As cool as it seemed to have an app then, it wasn’t as simple as it appeared. A lot of factors had to be considered. To begin with, a decent programming skill was needed which non of the  team members I had possessed.

A programmer could be hired but the resources to outsource a software engineer to build the platform we desired were non existent.

This was not all: access to content that students required for the platform was a headache too. Publishing houses had to be engaged for copyrights and these publishing houses also had expectations. For a number of reasons, the timing just wasn’t ideal to forge a partnership with them. With all these challenges at hand, we re-imagined the whole idea.

Going back to basics

The StudyMate team then looked at their problem more closely and they realised there was a platform where their target audience was already found. Yeah, you guessed it, WhatsApp. 32% of all data (broadband) consumed in Zimbabwe is consumed on WhatsApp.

StudyMate became a network of virtual classes on WhatsApp. They started with 3 WhatsApp groups for the 3 subjects that Rigney was taking.

StudyMate exists on a social platform hence it has become more than a learning material platform but a community of teachers and students helping each other learn. Rigney says:

For many it was more than a “WhatsApp group”, it was now a community where they could interact with their peers, in different parts of the country, share material, assist each other in various grey areas and even connect through the community through an initiative that we dubbed #StudyMateConnect. Students meet with other students from their respective areas for a quick group discussion after school hours or during weekends.

One of the Things that we advocate for and believe in at StudyMate is the power of “peer to peer learning.” This is by far one of the best ways to unlock potential and enable better understanding for students in their different learning areas.

What is fueling growth?

The first important thing to note about StudyMate is that it is built by passionate young guys who themselves experienced the problems they are trying to solve. This has made them rethink learning content for high school. They create infographics, podcasts and other easy to use materials to make learning less boring. All being distributed via WhatsApp which their customers already use.

The number one rule to building strong communities is that a community is a garden and every garden must have gate. That means you must have rules in place and be willing to enforce them otherwise entropy. It’s impressive how StudyMate can keep thousands of students organised and on task. High school kids are not the easiest bunch but StudyMate manages to get them to do stuff like this:

We introduced an activity that we dubbed #PeersTeachUs. Students teach each other on the topics they were best at individually and through forums (virtual conferencing).

The guys were telling me that some of the students on their platform are outside Zimbabwe. Some of the teachers that are tutoring classes are also from other countries within the region. It shows how WhatsApp has become so universal and StudyMate did well to realise this fact early on.