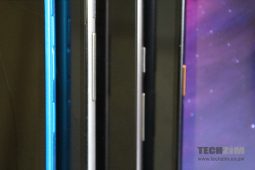 2018 was a pretty uninspiring year in terms of smartphones. Now that features are pretty much equal in phones, OEMs (manufacturers) are competing in design but even in that regard, there’s not much they can do with the mobile phones form-factor that will greatly set them apart from their competitors.

This is NOTch acceptable

Crappy joke aside, basically every manufacturer started kitting out their devices with notches. Following Apple’s move to put a notch on their 2017 flagship –the iPhone X- the industry was always going to go down that route. LG, Huawei, OnePlus, Google, Xiaomi, Nokia and many other smaller brands adopted the notch for their 2018 designs. Except for Samsung of course. They stayed true to their own design but that’s a story for another day…

Getting weird in the East

Maybe it’s not a bad thing that most manufacturers rip-off Apple because when they try to come up with their own devices it’s usually weird devices that don’t make much sense. Some perfect examples from last year include the Vivo Nex, Oppo Find X and the two-screened device that was the Nubia X. These devices are always cool-looking concepts but these and designs never translate to sales that compete with the likes of Samsung, Apple or Huawei. Basically, consumers go “Wow” at the unveilings and then go buy more sensible devices afterwards.

Not all notches are trash

We haven’t spoken about the tear drop notch. This was the more acceptable notch of 2018 (again this is subjective) and was also the least intrusive notch of the year.

This style will probably remain relevant in 2019 and I have 0 problems with that.

Is it too late into the article for me to say I don’t care much about smartphone design or manufacturers making some mythical perfect phone? Personally, the Galaxy S8 was the peak of what a beautiful smartphone should look like and I’ll be surprised if the next iteration of designs will change my mind. What I did know however is the notch trend was weird because everyone acknowledged that notches were ugly but consumers were supposed to get used to them for some weird reason.

So yes, even though design doesn’t matter much to me, I’m happy that the incoming trend looks to be waaaaaaay better than the devices that were being presented to users last year.  CES has been underway and one of the standout devices was the Honor View 20 and its punch-hole design. The View 20 has a much better design (to me at least) than most phones that were introduced last year and for people obsessed with all-screen phones this might be as close as we get since selfie-cameras aren’t going anywhere anytime soon.

The Galaxy S10 series is expected to have a similar design and it seems many other phones will be copying this trend in 2019 and I think it will be a welcome trend. Most tech reviewers are already heralding how much better this design is compared to what was there last year and I think even functionally the punch-hole camera design will give people their notifications bars back.

If there is a design shift that might actually change the way smartphones work and look it might be the foldable phone. There’s been many a rumor about foldable phones and they date back to as far back as 4-5 years ago but it seems 2019 is the year we will finally see proper foldable phones. Heck we’ve already seen a foldable phone; the Royole Flexpai.

It’s definitely not the most flattering device but I’m sure companies like Samsung & LG with more money and probably more experience with the technology will make much more desirable phones. We’ve seen a preview of a Samsung foldable phone and that means it may finally be around the corner.

Oh, and for those saying ZTE Axon M was the first foldable phone, I beg to differ. It was literally foldable yes, but it’s not what consumers and most players were referring to when they referred to foldable phones. The tech to make devices like that has existed for quite a while now. The Axon M was essentially two phones separated by a hinge…

Where does Apple go next?

Well, Apple have to contend with the fact that they have Face ID before they make any new decisions on the design front. Face ID comes with a number of components all housed in the notch and transitioning to a punch-hole camera will mean you have 3-4 holes on your screen which basically rules out that design for Apple. They’ll probably continue with the notch but that matters not, people will continue buying Apple devices anyway… Or will they?

3 thoughts on “The Notch Is Finally Dead! Are Manufacturers Making Smartphone Design Great Again In 2019?”