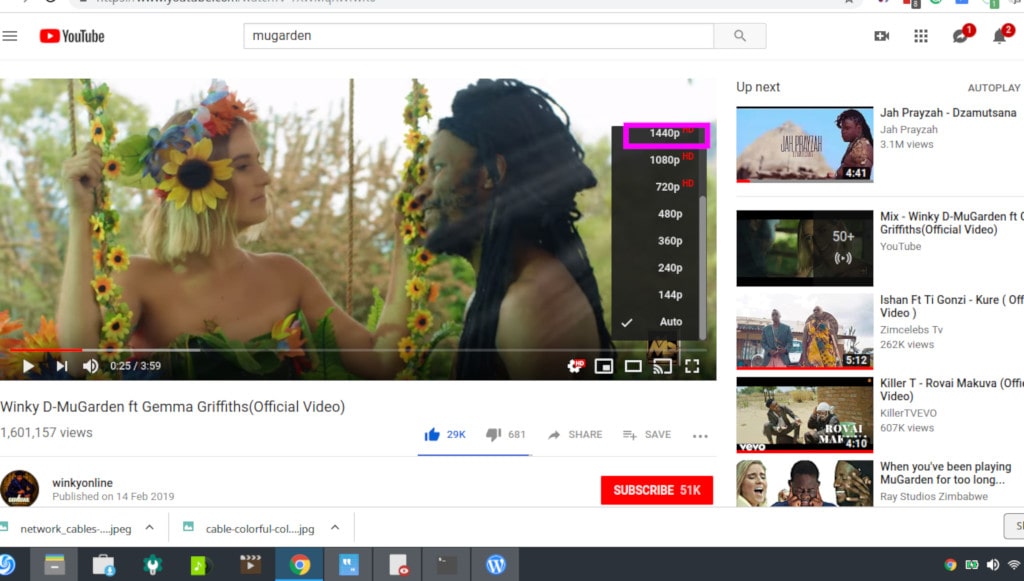 Right now Jah Prayzah and Winky D are hot items. Their last few videos have blazed past the 1 million views mark at breathtaking pace. Given our internet population hitting a million views here is like hitting a billion views in the US.

Their videos have also become much more slick and thoughtful. They, Winky D and Jah Prayzah, are not the only ones by any means, the quality of productions in Zimbabwe has risen over the years but these two artists deserve general praise for their efforts. Gone where the days where an artist would make a poor quality video of herself/himself dancing in front of a camera and call it an Official Music video.

What caught my attention when watching these guys’ latest videos however is the 4K label. Jah Prayzah’s last Full HD video was Dzamutsana which has a maximum quality of 1080P on YouTube. Both his and Winky D’s Valentine Videos are in 4K, now how did I miss that first time I watched them, I don’t know.

And so is this

There was a time when 1080P was the prevailing video standard. Don’t get me wrong 1080P still looks and feels slick although to be honest if you are watching a slow drama 1080P looks a lot similar to 720P.

Now, 4K is the accepted standard especially as our TVs keep getting bigger. I don’t know which is worse watching a 360P video on a 42 inch TV or going to Chikurubhi. It is always a good thing when our local industry catches up with the world’s best standards. We lag behind in a lot of areas as it is but this small victory does feel sweet.

What do you need to watch 4K?

Aaah first you need a broadband internet connection. The FCC is the US equivalent of POTRAZ and it considers 4K important enough they have reworked the definition of broadband to mean a link with at least 25 Mbps down and 3 Mbps up. Just kidding it could just be a coincidence that the broadband definition lists the recommended speeds for 4K.

On YouTube, you can play videos in 4K if you have a 10 Mbps connection and a device that can support VP9 codecs be warned that you might get a lot of buffering interruptions. In order to get the best of 4K you also need a 4K TV capable TV otherwise all that awesomeness is just going to be wasted on a 1080P screen.

So in short if you want to stream 4K videos on YouTube (or anywhere for that matter) you will need moolah, my friend, considering what Internet companies are now charging. You will need moolah and lots of it plus your arm and leg.