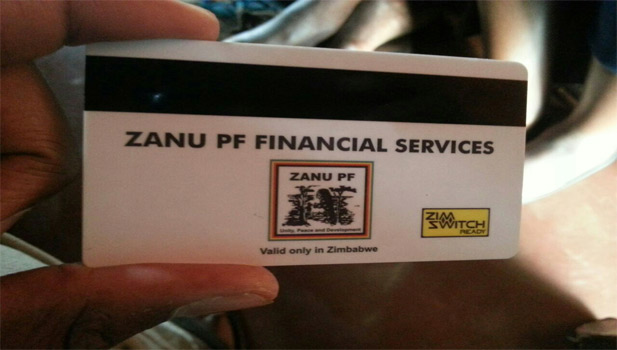 The ruling party seems to have recently issued out debit cards to party members. The card was introduced a number of years back but back then it was not entirely clear what the function of the card was.

For a $2 joining fee and a $1 monthly payment, the card can be used to transact at POS machines around the country. Members can also link their bank accounts to the card but the central purpose of this is to pay fees related to party membership as explained by Chairman of Zanu-PF technical committee Levi Mayihlome:

We have a new membership card that we have introduced. This is an ATM or swipe card which is compatible and can be used for any transaction in Zimbabwe.

You can load your money in there and is connected to our Zanu PF account so that members can put in their money.

We have the card centre that deals with basically how you join Zanu PF. The procedures required to join includes a joining fee of $2 and per month you can pay a dollar which is deducted automatically.

The card was introduced early this year, but the concept was there two, three years back, but in action we started rolling out the card in January last year in Bulawayo, Manicaland and Harare Province so that we can move with time.

It seems the card is also used by party members applying for funding for projects as Zoom reports that one party member informed them that once a project is approved funds will be put into that card.

A Zanu PF social media activist also recently urged people to join the party and also get the membership cards as money would be transferred into the cards in the near future:

Please join Zanu PF and get your Electronic Card that also works as a bank card. In the near future, money will be transferred into those cards for our members. Don’t be stuck with struggling parties, join the winners and be a happy human being!

Whether this is true or a way for the guy on social media to raise funds for his party through membership fees is entirely up for debate but people on social media were not entirely amused as you would expect.