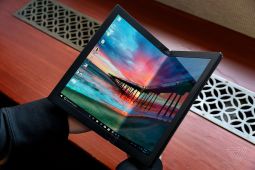 Foldable smartphones are coming out this year, from several companies that already announced their products. The most notable one is Samsung‘s Galaxy Fold. However, the foldable part of these products will be adopted for other products- laptops.

Lenovo is proud to announce what the company calls the “world’s first foldable PC”. Lenovo says it has been working on the laptop for the past three years, and will likely be launched as a commercially available product in 2020.

Lenovo hasn’t officially announced detailed specs yet of this kind of laptop. But according to Tom’s Hardware, which got a chance to check out the prototype in person, the prototype has an unspecified Intel processor, a display with a 4:3 aspect ratio, two USB Type-C ports, a Windows Hello-compatible IR camera, and stereo speakers.

The Verge reports that the device weighs less than two pounds. And Gizmodo explains that when you’re using the ThinkPad X1 foldable in laptop mode, you get a 9.6 inch ‘half screen.

Also we don’t know how much the foldable laptop will cost. But if smartphone makers expect people to spend as much as $2600 on smartphones with foldable displays, I certainly don’t expect laptops with even bigger foldable displays to be cheap anytime in the near future.

Apparently, adopting folding screens in laptops is the exact opposite to smartphones. In case of phones, manufacturers are trying to turn a smaller device into a larger one. In case of laptops, Lenovo is trying to make a larger device smaller, more portable.