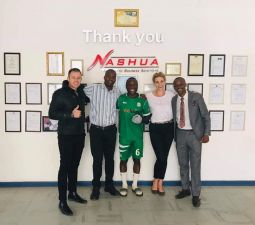 A few months ago we shared the inspiring story about Nashua’s 3D printing efforts. The company is 3D printing and giving away prosthetic hands to individuals who would have not been able to replace their limbs after accidents.

Back then the company was still getting to grips with the tech and perfecting the measurements in order to make the prosthetic as comfortable as possible.

This process is now complete and one of the initial beneficiaries Hardlife Zvirekwi (Former Caps United Player) received his adjusted prosthetic.

With our hearts full and souls pouring gratitude and excitement, we have SUCCESSFULLY completed the final fitting for Hardlife Zvirekwi, CAPS United FC player.

To the 3D team, thank you for your endless hours of working through the frustration, the learning and self teaching of how to go about this. For the weeks put into making this happen, regardless of the power cuts! For your determination

Hardlife, thank you. For being so patient with us as we worked our way around this and called you back in a few too many times “just to check”

Personally I am buzzing with excitement, I still have tears and I feel like we have only just begun the journey of technology and giving.

From the trial period, Nashua made the following changes to the prosthetics:

In future, Nashua plans to continue printing and donating these prosthetics but unfortunately the pace at which they do so is largely being affected by load-shedding.

Nashua’s Marketing Manager Laura Kelly said the following of the impact of load-shedding:

We are still printing and donating prosthetics, however are far behind schedule due to load shedding as we require 16 hours solid of power for just one part.

We need to catch up the back log of prints before we can take on more candidates.

Hopefully, ZESA’s antics won’t get in the way of such a great cause to the point where Nashua have to temporarily stop.