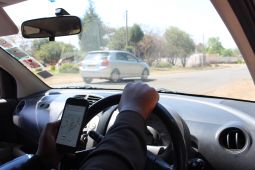 The son of Claudius Nyanga, a Vaya Taxi driver who was recently murdered in Avonlea, has come out and said they felt let down by Econet’s tracking systems which were not working when they were looking for his father.

I’m really hurt nemafiro ababa [by the way father died], ndiri kubatikana ne Econet. We paid for the car tracker but haina kuti batsira [it didn’t help] they kept telling to us kuti their server was down.

Zvinorwadza kuti [What’s painful is] we paid for the tracker when the car was registered for VAYA asi hazvina kubatsira [but it didn’t help].

We reached out to a former Vaya driver we know asking if the tracking system worked when he was a driver and he said he never got round to activating tracking because the login credentials to set it up were only sent to him “long after” he had actually stopped being a Vaya driver.

A Twitter thread by someone alleging to have registered to be a Vaya driver also raised issues regarding Vaya’s car tracking last year:

I registered my car @VayaAfrica Partner lured by @econetzimbabwe professionalism to my surprise thisVAYA initiative is being lead by unethical people with only selfinterests at heart,@CassavaSmartech, Just to begin with at training DEC 18 the VAYA guy lied that if we get tracker installed the $25 installation was wavered (sic) for Vaya partners only to get the same amount deducted from earnings and VAYA payments team saying there is none like that (sic).

The team which installed the trackers lied also that they will send coordinates for the trackers which never came we are just being forced to pay for a service we don’t even know how it works.

We got in touch with Cassava Smartech representatives trying to understand how this tracking system works and why there seems to be so many complaints when the system could be vital in assisting authorities in the event of s crime. Cassava Smartech said they are assisting the police in investigations:

Cassava Smartech Zimbabwe, the parent group of the company that operates Vaya services, is aware of a Vaya contractor who sadly lost his life in a suspected hijack and murder case that occurred this week and is currently under police investigation.

“We are deeply saddened by the loss of life and are working closely with the police in their investigations.”

“Our thoughts and prayers are with the family of the deceased at this time.

Whilst the statement doesn’t address the issue of car tracking, Cassava can assist through their connection to Econet by attempting to track the device via its IMEI whenever it gets switched on.

It is sad to realise that umet product promises have real world impact like this.