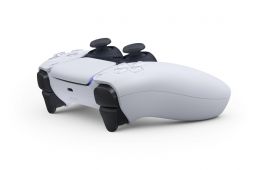 If you’ve closely followed my articles about gaming, you’ll know that I have a PlayStation 4 and that overall I’m pretty fond of the PlayStation series of consoles. Sony Interactive Entertainment’s announcement of the DualSense controller (yes DualShock is no more) hours ago is obviously exciting news for me and I must say the redesign is pretty interesting.

In terms of features, Sony is highlighting the following;

For me, the biggest new feature is the built-in microphone which will mean casual players no longer need to invest in a headset when playing online with their friends.

Traditionally, Sony controllers have had a single-colour design (if we don’t consider special edition controllers) but the DualSense controller will have a two-tone design and the light-bar has been moved to the front of the controller from the back,

Sony is yet to reveal how much the controller will cost, and more importantly, the design and price of the PS5 is also yet to get revealed.