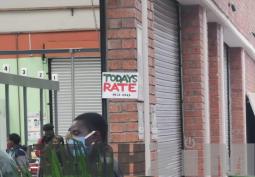 This coming Tuesday the 23rd of June 2020, the new formal trading of foreign currency via an inter-bank auction will kick off. This is the third time Zimbabwe is introducing such a market. In fact it’s just been 3 months since the Reserve Bank of Zimbabwe suspended the interbank forex market it had introduced a year prior.

As the auction resumes, the rules have changed slightly. The central bank says the auction will be running on an automated electronic system which assumes non interference in the process to manipulate the exchange rate. This has to be seen though.

Big businesses are starved of forex

A lot of big businesses are struggling to acquire the forex they need for key input importation. Some of those businesses are sitting on bucketloads of local currency which is essentially worthless to them. They will not hesitate to bid highly for forex pushing the interbank exchange rate towards what we are seeing on the parallel market today. Telecom operators are a classic example of such businesses.

Of course a lot of these big businesses will also pretend to need forex for imports when they will only want to keep their money in a more stable form. It will be up to their creativity how they will manage the feat but I am most certain they will try and almost as certain that they will succeed.

The other guys and gals

Can the gvt stomach it?

The real question is how far the government and its principal agent in these matters, the RBZ are willing to go. A devalued currency means salary reviews for civil servants have to be quite substantial. Inflation will sour to an even higher rate than where it’s at right now because pricing in Zimbabwe is inextricably linked to the exchange rate.

This trend can probably normalise if given enough space and time to play out but that’s the problem. Zimbabwe doesn’t have stable politics whether or not inflation is wreaking havoc to livelihoods. When that starts happening then politicians will do what politicians the world over know to do: they’ll kick the can down the road.

It’s difficult for me to imagine the government sitting back watching the exchange rate get to 1:100 overnight without ‘intervening’ and claiming there are saboteurs at work.

I am therefore left with pessimism all round. If the interbank market works then it will mean crazy erosion of people’s incomes. If this is stopped then we will be back into the loop we have been for years.

My sincere hope is that I am totally wrong and that I am missing some obvious things. If I am, I am happy to hear the optimistic view to all this.

6 thoughts on “The interbank forex rate will shoot through the roof, can the gvt/RBZ stomach it?”