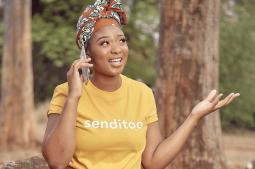 Senditoo has announced that they will be rolling out a referral program that will see Zim residents earn US$10 for new customers they refer or introduce to use their airtime or money transfer services.

The ‘Senditoo ‘Refer a Friend’ initiative is one of the largest referral programmes to be run by a remittance company in the Southern African country and Takwana Tyaranini, Senditoo co-founder said:

This is not a new concept but it’s a proven viral marketing strategy that will also provide an exceptional income opportunity for a large number of people and that excites us, as we get to incentivise our valued clients for helping us grow.

The venture will see referrers earn US$10 for every two customers introduced to Senditoo’s airtime services. New customers will also get US$10 if they switch over to Senditoo for all their money remittances and will receive a free T-shirt as well. It’s not exactly clear how Senditoo will determine how one has switched over for all their remittances but there’s a prize for that too – I got in touch with Senditoo and are waiting on a response.

There’s not much to say, I think Senditoo’s thinking here is pretty simple. One of the hardest things is getting customers into the door and the referral program looks to onboard as many customers as possible.

We are encouraging people to refer at least two people to earn US$10, but they are more than welcome to refer as many people as they want and will receive incentives based on their referrals – simply WhatsApp +263716357963 for more information

I tried the WhatsApp bot listed above to see if there was any more information available regarding the referral program. I’m not sure if the number is a bot or it’s human-controlled but I tried getting information from 2 numbers to no avail. I’ll update the article once I get a response.

Update: We got in touch with Senditoo reps who confirmed that customers will be given codes they can use as unique identifiers to refer and later redeem their US$10.

The official we spoke to also shared the detail that in Harare they’ll be able to give US$10 as cash but outside the capital, they’ll only be able to give prizes out as RTGS at the interbank rates that will be prevailing at the time of referral.