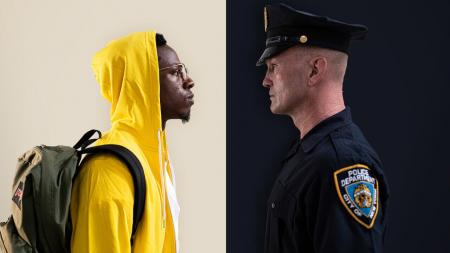 At first glance, Netflix‘s Two Distant Strangers seems like another banal remake of Groundhog Day with little else to offer in the way of originality except for a black cast. God knows how many time loop movies and TV shows I have had to watch in recent years but they are a lot. They range from unstimulating to scintillating. Two Distant Strangers is definitely in the latter column, it makes you take a pause and think.

All he wants is to get home to his dog. But when he steps out the door, the worst day of his life begins… over and over again.

The plot is simple enough, the protagonist, a black man in today’s racist America, just had a one night stand which he has managed to turn into another date, steps out into the world as he embarks on a journey back to his apartment, where his dog is waiting for him. No matter what he does he keeps dying in police custody.

It’s a fate he cannot seem to escape no matter what he does and in this 30 minute movie he tries everything including running away in the opposite direction, raising his hands to show he is not a threat, cooperating with the police, talking to the officer and actually asking him to give him a ride. Each time he ends up dead anyway much to his frustration.

The movie is a not so subtle vignette on the everyday death of black American males at the hands of the police in that country. It’s just something that keeps happening no matter what they do. Before the advent of social media, such deaths would go unnoticed and more often than not, the police’s version that the suspect had somehow done something to bring about their own deaths was readily accepted by juries, prosecutors and the wider public.

It’s a narrative that has been exposed as mere fiction on more than one occasion in the age of prevalent video. The latest controversial and widely reported killing was in Minnesota when an officer allegedly mistakenly killed a black suspect by shooting once. The officer says she meant to use a taser.

One can easily draw comparisons with how white people are treated with kid gloves by the police. Perpetrators of mass shootings and killings, another common American occurrence, are mostly white men. They often get arrested without being fatally shot despite the fact that they would be armed. The words terrorist or thug are often never used in relation to such incidents with the media and police preferring to refer to mental health by default.

The stuff made for Oscars and to be enjoyed

Two Distant Strangers has already been nominated for this year’s Oscars. What makes it a rare piece of gold is not just the compelling moral narrative or the comedy-wrapped anguish, rather it’s the fact that the movie does not waste its breath with sideshows. The producers and actors had a story to tell, they told it in the shortest time possible (30 minutes) and when they were done the credits roll.

There are no meandering scenes with sombre background music meant to tug at the strings of your heart. No cinematic shots of the author lying down dead either. Once it’s clear the man is dead the movie cuts back to his bed and the day begins again. It’s a movie made to win an Oscar, tell a story and be enjoyed.