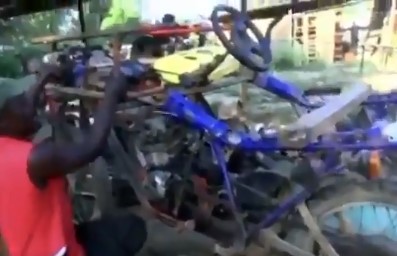 Gwanda native Nhlanhla Gabula popularly known in the area as Orieyantso designed a working quadbike from scrap metal. In a report by the Chronicle, Nhlanhla Gabula was left out of school just as he was about to finish his final term of form 1 at Gwanda Highschool.

Missing out on formal education didn’t however dull his enthusiasm for internal combustion engines and fabrication. The current version is the second attempt at the platform after destroying the first which was assembled in 2004 to 2005 due to financial constraints.

The second design is a merger of what looks like two, two-stroke motorcycles married together into one. Steering is done by a centrally positioned steering wheel which by the video from the ZBC looks like it controls the forks of the two merged motorcycles.

As for the brake and throttle controls it unclear how was able to bring them both into the centre of the quadbike. Speaking on his project Nhlanhla Gabula said the following:

“Well this has always been my dream to come up with something like this and the lockdown gave me an opportunity to bring the dream to life. What I did was use parts from two old motorbikes at my workshop and scrap metals to assembly this quad bike.”

“I managed to raise money to fulfill my dream and this is where l raised all the parts required. In three and a half months l was done and dusted.”

“This is not the ideal quad bike l desire to design. With all the right equipment l can pull it off in a month without any scratch or untight screw.”

“My target is when l get all this to create employment and grow as a company that is able to make two quad bikes a month or even more considering the raw equipment.”

At present, Nhlanhla Gabula is an Ostrich Keeper and uses the quadbike to keep track of his flock.