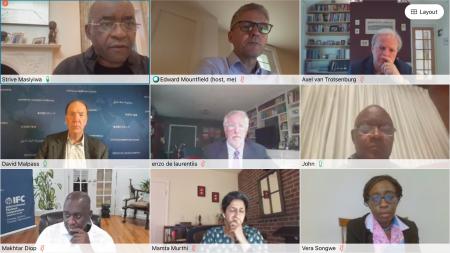 David Malpass later tweeted a screenshot of the meeting showing him and the bank’s top leadership, discussing with Strive Masiyiwa, Dr John Nkengasong, and Dr Vera Songwe, the UN Under-Secretary-General at the Economic Commission for Africa.

The @WorldBank Group is partnering with African Union countries & @AfricaCDC.

Together, we will finance #AVATT #COVID19 vaccine options & get needles into arms. pic.twitter.com/FRAwCoQxna

Malpass was attending the G7 meeting and he met with the African delegation prior to the meeting. The World Bank has been working with the AU/AVATT for more than six months in a bid to help African countries secure vaccines valued at more than $3bn, that were secured from Johnson and Johnson and other suppliers.

“AfriEximbank put up the guarantees we used to make an advance purchase, and the World Bank then provides loans and grants to member states who wish to buy the vaccines. The World Bank has set up an expedited process for this, and countries can get loans to buy vaccines and to implement their programmes”

“It’s exciting to know that we have commitments for all the doses now, and we could do more”

The Johnson and Johnson Vaccines will be produced from the Aspen Pharma facility in South Africa and will not be affected by the issues that affected a J&J factory in America.