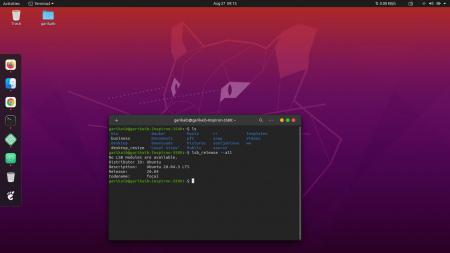 As you probably know I am a shameless Ubuntu proponent. I sincerely believe that operating systems should be free seeing as it is they are now mostly irrelevant in the cloud age we live in. We mostly just use them as portals to the internet where we access the real tools we need. It is therefore in that spirit I am pleased to say the latest version of Ubuntu LTS-Ubuntu 20.04.3 is finally out after a few weeks of delays.

A brief guide to Ubuntu versions

If you are mildly familiar with Ubuntu then you know that they use the name-month scheme to name their releases. This means that Ubuntu 20.04 was released in April of last year. This is why it might confuse you to learn that I am talking about it in August of 2021. Let me explain.

There are generally two versions of Ubuntu. The so-called normal releases Ubuntu. These versions have a lifespan of 9 months from the day they are released. During these 9 months, Canonical the company behind the project issues security patches and upgrades for the packages that make up Ubuntu. After 9 months they stop and move on to the next ordinary release and so on.

To cater for business users who hate having to constantly upgrade their operating systems for no apparent reason Canonical also has what are known as LTSs or long term support releases. Like if you are a business do you really need Windows 11 when Windows 10 works well enough?

Long term support versions are released every two years in April so we have:

Generally, an LTS is supported for free for 5 years. If you pay Canonical and are put into an Extended Security Maintenance program you get even more years. This is what most businesses and power users want instead of having to constantly deal with the headache of upgrade after an upgrade.

The truth though is that not updating an operating system over a period of five years is sometimes not ideal. You have new features that are just too good to miss and then there are important security upgrades that would be a nightmare to port back. You also have new kernels that come with must-have features.

To solve this we have what are known as point releases. This is when an LTS is given some essential upgrades for example including a newer kernel and some patches. This keeps the operating system fresh and modern and also solves another problem. Users who download an Ubuntu LTS ISO will get a more recent system instead of having to install a gazillion upgrades as soon as they boot in for the first time. Ubuntu 20.04.3 is the latest such iteration.

Probably nothing you will notice from looking at the desktop. As I said the aim is not to rock the boat so changes are mostly under the hood security patches and tweaks. The headline element is that this version of Ubuntu comes with the new Linux 5.11 kernel. This fixes a lot of issues especially with NVIDIA graphics drivers and also comes with Intel’s Software Guard Extension support. It also supports more chipsets which means better support on Chromebook hardware e.g. the MediaTek and Helio P90 chipsets.

You also have Libre Office 6.4.6, if you want the latest LibreOffice, version 7, you have to install a Flatpak, Snap or via PPA. They have also updated the Gnome Shell to version 3.36.5 and you get Firefox 91 right out of the box. Again you can always upgrade this software yourself to get more recent versions.

As already said countless times. The emphasis in these releases is stability and performance rather than the latest features. You can download the ISO here. If you are running Ubuntu 20.04 like me you just need to make sure your system is up to date. You can confirm you are running point release 3 by opening a terminal and running the command. lsb_release –all. You will get something like what’s below.