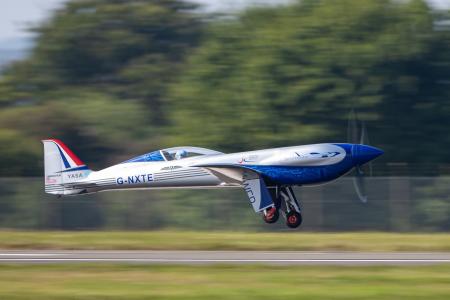 Luxury vehicle and aircraft engine manufacturer Rolls-Royce announced that its all-electric plane called the “Spirit of Innovation” completed its first flight. The trip lasted 15 minutes but it marked a huge milestone in the aviation industry’s quest to end its reliance on fossil fuels.

“This is not only about breaking a world record; the advanced battery and propulsion technology developed for this programme has exciting applications for the Urban Air Mobility market and can help make ‘jet zero’ a reality.”

Rolls-Royce’s electric plane is powered by a 6,000 cell battery pack that delivers 400kW or 536 Mechanical Horsepower. According to Rolls-Royce, the aircraft can reach speeds of 480km/h and the goal is to offer its customers an electric propulsion system platform.

The company is quite ambitious as it also hopes to have electric vertical takeoff and landing (eVTOL) systems as well, like the famous Harrier jump-jet but with batteries. Roll-Royce also wants to enter the all-electric passenger commuter aircraft market and is working with a company called Tecnam on air taxis.

As good as this all is there is still some work ahead to make electric planes viable. Getting a battery system that can deliver enough power for longer flights is certainly one giving a few very intelligent people sleepless nights. I would imagine after that it would be how much load that the electric aircraft can carry, oh and the weight of the battery pack itself.

A road-going parallel of this is Telsa‘s Semi (haulage truck), which has been delayed again and again. As interesting as the idea is, there is only one thing that the haulage industry cares about and that’s how much it can tow. As far as I have read on the interwebs there have been pronouncements of its capabilities but we still haven’t seen anything demonstrated.

The electric aircraft faces much the same problem but with more variables to account for. However, I am not a complete curmudgeon and I think that this step by Rolls-Royce is encouraging and I hope to see more demonstrations in the future.