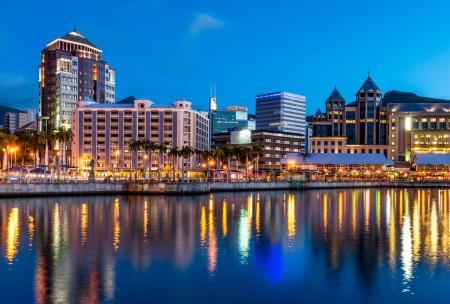 When people think of countries with secretive banking laws that favour money launderers and big criminals they almost always think of Switzerland or sometimes Panama and similar South American havens. Few think of Africa, but for a long time now Mauritius has been the Switzerland of Africa. They had opaque laws that favoured the creation of shell companies, blind trusts and other money hiding vehicles.

That made them a hit with a lot of individuals, corrupt government officials and maybe terrorists from the region and beyond. Besides the very lax financial regulations, there was a bonus to hiding/keeping your money in Mauritius. If you were not a resident or citizen you did not have to pay any taxes. That was an irresistible bonus that drew in much needed financial capital into the country which is arguably one of the most developed in the region and indeed the continent.

It’s all coming to an end

Now that is all about to end. The Mauritius Revenue Authority (MRA as it is known) recently announced that foreign trusts that are held within the country will no longer be exempt from income taxes. This means that even if you are a non-resident your will be required to pay taxes on profits made by entities domiciled in Mauritius.

Amending the Finance Act is nothing to write home about. In fact, all countries amend their Finance Act at least once a year. Nor is changing tax laws to apply to foreigners although that is likely to have a chilling effect on FDI. What is groundbreaking is the implication of secrecy laws.

You see, in order for you to pay taxes on the income, we first have to determine how much taxable income you have to begin with. That means that you have to disclose to the authorities how much money you have and that runs afoul of the established secrecy laws. Now that is likely going to spur a flurry of activity as those affected try to move their money to other safer destinations.

Given the risk of capital flight, why is Mauritius doing it then? Well, they really have no choice in the matter. Last year an influential inter-governmental group called Groupe d’action financière (GAFI) or Financial Action Task Force (on Money Laundering) (FATF) classified Mauritius as a high-risk country and put it on the so-called grey list saying the country had strategic deficiencies in its financial systems. Not long after the European Commission added Mauritius to its high-risk third countries.

The list identified countries presenting deficiencies in the way they addressed anti-money laundering and counter-terrorist frameworks (AML-CFT Framework). In October 2020, this list officially became known as the EU blacklist.

There are countries with more lax laws but you can always count on rich countries to come down hard on an African country and use the terrorist word. That caused the authorities in Mauritius to panic and they have resolved to remove themselves from this list. This amendment is just one of those attempts to get off the AML-CFT Framework list. As such efforts continue expect Mauritius to become less of a safe haven.

So if you are considering laundering your money or hiding you’re stolen you would do well to take Mauritius off your possible safe haven list. It’s only a matter of time before they get to the freezing assets part or start sharing your secret with Western powers.