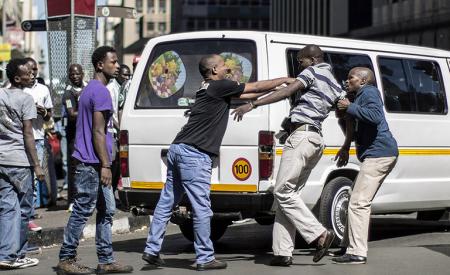 In yesterday’s article, I talked about how a lot of traditional businesses are struggling against new data and tech-driven startups. In the western world, such businesses have resort to lobbying and asking for protective laws that do not always make sense to be passed by politicians in their pockets. Some businesses, however, like the South African taxi associations who are facing threats from Uber and other ride-hailing apps are resorting to another tried and tested tactic-violence.

While the South African government has had the good sense not to ban kombis during the ongoing pandemic the “taxi” industry in South Africa has seen a massive drop in income. That was only natural given the fact that people’s movements have been restricted by lockdowns. However, the “taxi” associations that rely on people coming to ranks and established pick up points also feel that Uber drivers are stealing their customers from them and making things worse. This is because with ride-hailing apps you can order a pickup without ever leaving your house and pay an established fee instead of heckling with a tout.

South African taxi associations have always fiercely protected their businesses. They wage senseless and bloody route wars with one another with scores of people dying during these flare-up periods. They behave more like drug gangs where routes are akin to territories, the property of the taxi association that represents the kombis that ply that route. The taxi associations make good money as members pay them for protection and the right to ply given routes. Ride-hailing apps circumvent this established crony system and the taxi associations are not happy about it.

They have started to resort to thuggery and violence against ride-hailing companies with such incidents on the rise. In the video above, members of an unnamed taxi association attack the driver accusing him of stealing their customers. They behave as if they own not only the routes but the people that use those routes too. The leaders of other taxi associations and government officials have come out to speak against the attack but that is all they will ever do.

The politicians in South Africa have been traditionally powerless when it comes to controlling the behaviour of taxi associations. Often the taxi wars end on their own with the police hapless and powerless to stop them. It’s not clear whether this is due to lack of willingness or they just do not have the capacity to deal with such acts of criminality.

3 thoughts on “Unable to compete with Uber & other apps, SA Taxi Associations resort to violence”