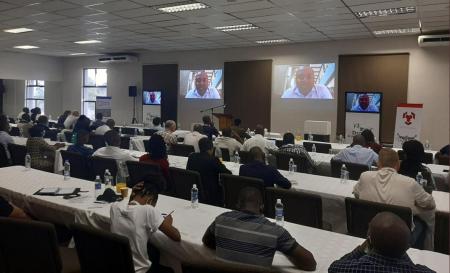 Last week Precision Aerial, Zimbabwe Flying Labs and the Drones for Good Network held Zim’s first-ever drone conference. The event was well attended and represented by a number of local, regional and international startups and organisations.

For someone like me who had only dipped his toes into unmanned aerial systems, Drone Con Zimbabwe was overwhelming. There was so much to learn with each speaker bringing with them a wealth of knowledge and experience in their respective fields.

However, even a newbie like me was able to learn a thing or two, so here are my takeaways from Zimbabwe’s first-ever drone conference.

The drone community is a cult but in a good way

If you’ve ever heard Tawanda Chihambakwe speak about drones then you probably know what I am going to say next. If you haven’t, the guy is super passionate about the industry as well as what drones and unmanned aerial systems can bring to a number of industries in Zimbabwe.

Now imagine that passion being common among all of the participants at the event, speakers and attendants alike. I joked with one of the delegates that if you substituted any other topic for drones at this conference I would have backed away slowly.

This speaks to the levels to which the community is so fervent in its pursuit of a number of issues in the advancement of drones and adjacent technologies. The one thing that cemented the “cult” analogy was the way that all the speakers (regional and international) were keenly aware of the regulatory situations in each other’s territories.

Since the conference was in Zimbabwe it was amazing to see delegates from across the board with a working knowledge of what the Civil Aviation Authority of Zimbabwe (CAAZ) was doing and not doing as far as regulation for unmanned aircraft was concerned.

In those conversations, I learned that South Africa may have the strictest in Africa (and the guy who crafted them was in attendance). Their regulations are so stringent that even stationary tethered UAVs are regulated. This to me seems asinine because it isn’t going anywhere and is limited in its altitude by the length of the tether that powers and controls it.

That frustration caught me off guard because for a moment I thought I was becoming one of them.

Our local authorities are more progressive than I thought

One misconception about our local authorities is that they are still in the age of filing cabinets and physical documents while the rest of the world has progressed to cloud computing. That line of thinking was smashed in my head (in part) after the presentations done by the Civil Aviation Authority of Zimbabwe (CAAZ) and the Zimbabwe Electricity Transmission and Distribution Company (ZETDC).

The former has, at its own pace, crafted protocols that are in use to manage the drone and UAV space, however, the problem lies with the CAAZ itself doing this. What I mean by this is that there should be an independent body that regulates UAVs and drones.

The disciplines of manned aircraft and drones are far apart even if they operate in the same medium. Some of the rules and regulations are at present more for manned aircraft than for unmanned. So for the sake of progress, there is a pressing need for a separate body to govern drones even if it’s under the CAAZ.

As for the latter, it was good to see that ZESA already has drones working in some parts of the national grid. The local power utility has had a torrid time with the aged equipment across the country and sending a team out there to inspect is a costly exercise.

A couple of guys with a drone or even a long-range drone to map out power lines and infrastructure would be more cost-effective down the road. It would certainly mean that fewer technicians and engineers would be placed in harm’s way just to inspect components.

The life of a drone pilot is not sexy

One of the delegates said to me that the life of a drone pilot is nothing like what we see in the movies. No one takes a drone out at a site and starts doing complex manoeuvres and the likes. More work is actually done in planning the mission than anything else.

And with the advancements in drone technology if you have a map of the area the drone will do most of the work. The only thing the operator, in most cases, has to do is to change out the battery whenever the UAV comes back to the launch point.

The cool flicks and tricks are more in drone racing which is something else entirely. However, the most important thing concerning drones is not the data collected, it’s…

How the information is processed

If you want to contract any company that is in the UAV and Drone space you will as preciously mentioned need them to also craft a plan for your mission. This includes the drones that are best suited for the application and obviously the costs.

After that is all tied up then the mission can go ahead but as the drone(s) is up there doing its thing, the team contracted will also have to think about how the data gathered will be processed.

This topic was one of the recurring talking points throughout the two-day conference. Digital photogrammetry should be put, at least from my understanding of the undertones, in a way that the engineer, as well as the executive, can easily understand.

The two different departments have to work in tandem and with full knowledge, if any progress in the venture is going to be made.

We need more of these

Zimbabwe’s first drone conference was excellent and we need more of these not just from the UAV guys but from many other startups in different industries. The knowledge-sharing on display is going to mutual benefit all involved and is something that I would like to see the eCommerce scene in Zimbabwe emulate.