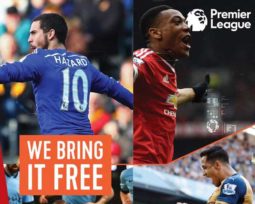 The festive period is funtimes for me for one simple reason – sport. Us, sport-lovers get a treat as the English Premier League, NBA and other leagues cram games into a tight schedule around Christmas. Just a few weeks ago we watched Lewis Hamilton get robbed in the craziest finale to an F1 season. It’s must-see live TV.

Every time I watch a live game on TV, I am amazed at how it’s possible for me to watch a man kick a ball just seconds after he did so 15,000km away. Technology really helped sport become this multi-billion dollar industry we know today. Were it not for satellite technology, I wouldn’t be a Man United fan today.

Technology is a two edged sword though. The constant progress may present challenges just as quickly as it does opportunity.

Manchester United has the largest stadium among the teams in the EPL (English Premier League – the most popular football league). At 74,000 seats, it is impressive but it is nowhere near being enough to house the over 1.1 billion fans they have worldwide.

So, satellite technology provided the stadium big enough to house those billion fans. And as you would imagine, revenue from broadcasting to the billion steadily rose to surpass matchday revenue from the lucky 74,000 that get to attend in person.

In the year before the pandemic decimated matchday revenue, Man United’s broadcast revenue was about 2.2 times matchday revenue. Dependence on broadcasting has only grown in the social distancing era.

Now, football clubs have traditionally not been tech savvy and so they partnered various companies to broadcast their games to hungry fans. This chain of companies, including DStv, became the middleman that we, the fans, have to deal with to get our weekly fix of the beautiful game.

The EPL football clubs sold the broadcast rights for 2019-2022 for about £9bn. For the 3 years from 2022, the EPL is set to get more than £10 billion. This is all great but there is a new technology throwing a spanner in the works.

Sport, the internet and social media

The internet disrupted a lot of distribution models. Some of those potty mouthed Zimdancehall artists we love would have never had a career if distributing content wasn’t as easy as it is on the internet. Both distribution and fan engagement through social media has been upended by the internet.

Football clubs now have access to their fans in a way that wasn’t possible before. So, for Man United with over 150 million connections on social media, the engagement possibilities are infinite. They release exclusive content – interviews, training sessions etc – and so no longer need a matchday to interact with fans.

Traditional media, including DStv, simply cannot compete with this. In the past, some clubs sold the kind of exclusive content we discussed to companies like DStv. You may have seen Liverpool FC TV on DStv but more and more, clubs are choosing to distribute such content through their own websites, apps and social media accounts.

Make no mistake, the main attraction in football remains the live match. Companies like DStv remain relevant because of this but the internet is coming for this too. As Napster and Limewire were to music so are Redditstreams to content distributors. For those that have good internet, it is easier to illegally stream live football games than ever before. Not that that’s a good thing but that’s the reality.

So, with this in mind you can see how the Showmax Pro option from MultiChoice seems a bit underdressed. In offering live streaming of some football games including the EPL but excluding the Champions League it becomes hard to respect.

A football fan who forgoes the satellite option and decides to stream all their games will have to find a solution for the Champions League. Unfortunately they may be forced to stream those illegally. Soon they will realise they can do that with the other games too and Showmax Pro is left in the dust.

Football clubs need not worry about this activity for the moment. The clubs collectively sell rights to all the games in their league and it’s up to those content distributors to ensure they get paid. Chelsea FC’s revenue is not directly affected by you skipping DStv subscriptions.

In the long run that could mean the content distributors will negotiate broadcasting rights down if they keep losing customers. However, as we saw, the price for those rights is set to rise from 2022 and so for the medium term, the DStv’s of this world are alone in feeling the heat.

The fight for our attention

Football clubs have to be wary of the gift that is ‘easier distribution’ though. That is because it is now easier for everyone else to distribute their content. You would have thought some guy just making silly jokes in his bedroom could never be competition for the best sports show in the world but that’s not the case.

Tik Tok, YouTube and their friends are proving to be formidable foes for sport. Time spent scrolling through TikTok videos is time not spent watching live football matches or other football content.

The worst case scenario for football are fans who are completely missing matches whilst they are busy on YouTube. For those that are watching live matches, they are not giving 100% of their attention to the screen either. Most millennials and younger generations cannot go through a full game without touching their phones. Myself included.

I’ve always felt that this is DStv’s main threat – the multiple entertainment sources and the short attention span of younger customers. Even a person who prefers reading on their Kindle is one less DStv/sport customer. Netflix and friends only complete the killing.

To deal with this smartphone addiction, football clubs are meeting their fans where they are comfortable – social media. Fan engagement is only increasing every year. Young fans love tweeting about games and searching for stats and football clubs are scratching that itch to their benefit.

You might not believe it but this sport where men race in cars in circles for hours on end saw the biggest growth in social media engagements last year. They grew faster than even the English Premier League and every other sports league.

That was impressive because a former F1 boss is famous for saying he didn’t care about social media and younger fans who do not have any money. New ownership came with new thinking and fan engagement on social media was prioritized.

F1 has gained millions of new fans in the last few years. They release a lot of analysis, team news and even race highlights to their YouTube channel timely and well packaged.

F1 partnered with Netflix to release the Drive to Survive docuseries since 2018. The series tells the story of an F1 season in the most dramatic of ways. Proper Hollywood storytellers help shape a season’s story to resemble a blockbuster movie. The result – a boom in new F1 fans in the USA.

The way we watch sports is changing. It is surprising to me to find fans playing fantasy football and e-sports games and yet not interested in watching the live football games.

Polls show a significant number of younger fans are content with watching just the match highlights. These fans can go a whole season without watching a single live game in full. Yet, they regularly interact with their favourite clubs on social media.

Sports teams and associations are adapting to these changing watching habits. Racking up millions of new fans in the process. These fan engagements are also turning into quite the money maker.

Earlier, we mentioned that Man United’s broadcast revenue surpasses its matchday revenue. Well, so does their commercial revenue from partner companies. It turns out that a huge social media following and good engagement helps when negotiating with club sponsors. Man United does not directly monetise their social media like almost every other club but that will surely come in the near future.

To the hardcore fans, a person who follows a team on Facebook and yet never watches their games cannot be called a fan at all. That may be true but in this internet age, such non-fans are important to clubs too.

One can only imagine where all this leaves DStv. Their cornerstone content is undergoing a revolution right before their very eyes. Maybe they will adapt timely too.

4 thoughts on “Technology is changing sport as we know it”