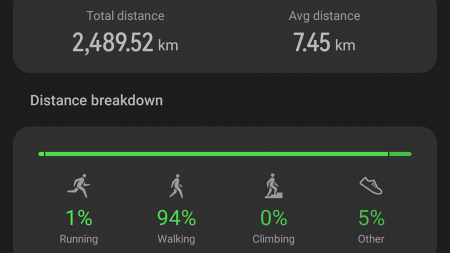 That is an average of 7.45Km a day. 223Km a month. An inside joke at Techzim states that I am the resident road runner and obviously that comes with a shoe bill worth some hefty chest pains.

Nonetheless 2021 is the year when I got a smartwatch. A Huawei Watch GT2. Naturally. And to be honest it actually came with a bit of some peer pressure. As much as it in essense is a device I wear on my wrist which can tell time, the knowledge that 95% of the features and hardware on it are fitness related made the super user in me want to practically explore all these features in action.

It has built in GPS. It has a heart rate sensor and can measure my stress levels. It has an altitude meter. Finally. I say finally because, when I had the Huawei Mate 9, the chipset included a barometer. Something I found lacking in the Huawei P30 Pro because…well a ‘P’ series Huawei is not as flagship as a ‘Mate’ series Huawei. Imagine that.

See the watch opened my eyes to a wealth of data about my daily life, my daily routines and my fitness habits in a way I had never really seen before. I mean on average I walk around 4500 steps a day when I don’t go out galavanting and when I do go out I walk an average of 15000 steps.

Men have this inherent competitive nature about them and even with no men around to compete with, that nature is very comfortable being in competition with itself. I had a feeling this was the case but that was until I experienced it first hand and I think it’s the darn watch that blew the mist from my eyes.

Heart rate. One hundred and three beats per minute.

Male voice from the watch during the outdoor walk workout routine

“What if I walk a bit faster this km and beat my pace for the last km?” Peer pressure from the data. By 4km I am speed walking and when that 5th km mark came in I knew it was a good km. I literally had been speed walking down the streets in my Power branded sneakers, sweat running down my face and back like I just ran out of the shower. Ding!!!

Heart rate. One hundred and twenty five beats per minute

Naturally walking is an activity I enjoy doing. The creative in me feeds from that but I an also of the conviction that scientifically exercise increases blood flow to the brain and nourishes the brain with an abundance of oxygen. It’s a good way to get new ideas flowing for the videos I then make. However 2489km! I can bet 1000km of that was just the abundance of data from the watch just influencing me to go further. Go longer.

Even when I actually have to be on the desk combing and scrubbing through videos clips and getting lost in scripts, I occassionally get some taps on my wrist. I peek at the watch and there is an animation of a human sitting, then standing up, then stretching. This is a reminder from the piece of tech on my wrist that I have been sitting for too long.

So putting it into context. In 2021 I walked a distance slightly further than Harare to Dar es Salaam and slighlty less than Harare to CapeTown. And I have absolutely no physical gains to show me. It’s crazy I know. But I know having this wrist watch looking fitness tracker on me has morphed my casual therapeutic walks into an internally competitive routine between me and myself. And it’s been fun. 2022 you ask? Maybe I might walk to Cairo. Maybe.