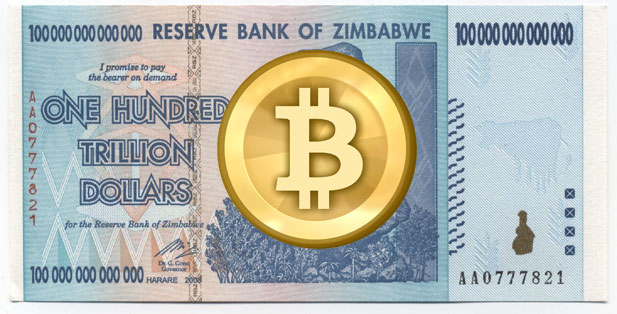 Conventional currencies are broken. No one knows that better than the Zimbabwean who watched helplessly as institutions – government, politicians, bankers  – they trusted to look after the value of their money conspired and eroded hard earned savings to nothing over a few years.

Paper was printed wantonly, and the value of savings lost faster than the average Zimbabwean could figure out what was going on, or learn how to protect their money.  As if this was not enough, unscrupulous bankers resorted to using depositor funds speculatively to buy bricks and cars, which eventually got them shut down, and the biggest loser was none other than the depositors. A system trusted for so long to deliver, bared its inherent weaknesses and more importantly, that it didn’t care about the depositors that oiled it. People moved back in time to barter trade and mattress banking.

Much of the western world was to learn this hard lesson too. The conventional currency system, previously trusted to deliver, has proved it has so many holes allowing it to be abused by institutions that control and run it.

But this is not the only problem. Payments with conventional currency on the internet are a huge pain. And again no one knows that better than a Zimbabwean. Anyone that has tried to make (or receive) internet payments in Zimbabwe has realised soon enough that conventional currency is alien to the open nature that makes the internet the powerful system it is. They realise that on the internet PayPal answers to the US banks and the US government. They realise that Amazon does to. And so does Facebook. The ultimate realisation is that a political squabble between two governments can effectively close and break internet functionality for ordinary people that just want to transact.

Bitcoin, a relatively new digital currency whose recent hype, highs and lows have afforded it mainstream attention, suggests a solution to these fiat money problems. Bitcoin does away with the need for a third trusted party – like PayPal, governments, banks etc… – by basing the currency on an open peer to peer network of computers that maintain, together, a public definitive ledger of all transactions going through the system. The public ledger means a Bitcoins are not double spent.

The Bitcoins are like virtual gold with new Bitcoins mined on the internet by very powerful machines, predictably adding more to the universal pool of Bitcoins at given intervals. This is done in such a fail proof way that makes it impossible for anyone to create new Bitcoins wantonly the way governments “quantitatively ease” problems with conventional currency. The Bitcoins are also finite and will stop being produced by the machines when they reach $21 million, all without intervention from central ‘trusted’ regulatory authority.

You can read more about how Bitcoin works here.

But Bitcoin has its problems. One big one is its susceptibility to hacking. Not in terms of rendering the whole system useless, but in terms of influencing Bitcoin value so much it can fluctuate to crazy lows. Or, in some cases, hacked Bitcoin exchanges (created to enable people to cash Bitcoins, or buy them) go down with customer Bitcoins the same way banks have.

There’s also a whole ongoing debate about the future of Bitcoin. It’s been called a bubble.  But after bursting at least once earlier this month, Bitcoin value is on the rise again. Apart from the hack attacks on Bitcoin exchanges like that on the largest exchange, Mt Gox, last week, there’s also argument that the system is based on software and that all software has vulnerabilities. There’s also the reality, like the internet, that a system that encourages anonymity, can be abused for illegal activities. Activities that trusted governments, banks and regulators have so far fought with anti-money laundering restrictions for conventional currency.

Its inherent problems notwithstanding, the possible opportunities that Bitcoin presents, especially for countries like Zimbabwe, are hard to ignore.  Afrinnovator’s Mbwana Alliy gave examples earlier this month for situations where Bitcoin would be a great solution for example for a Zimbabwean developer to receive payment for their freelancing online.

What about using them as in investment or even to save money long term? Is it wise for Zimbabweans to consider this especially with the ever present message from the those determine such outcomes that we may return to the Zimbabwean dollar, and that they would dictate how this return would work?

Have you considered Bitcoins yourself? As a merchant or freelancer would Bitcoin present the opportunity to get paid by a global pool of customers convenient in a way that both Vpayments and EcoCash can’t?  As an internet customer do you wish more merchants started accepting Bitcoins?

32 thoughts on “Bitcoin, a currency and payments opportunity for Zimbabweans?”