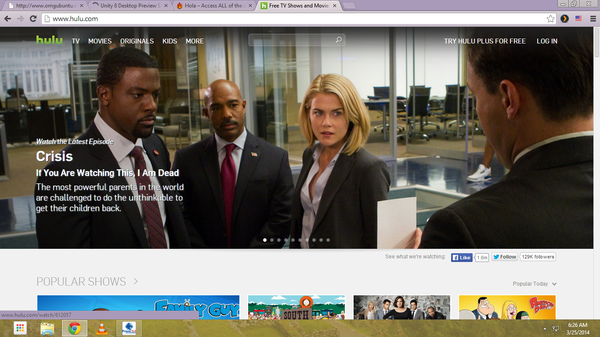 The internet is teeming with DNS unblockers but Hola is a unique service. I stumbled upon the App as I was looking for a user friendly VPN app that I could use on my Linux box without fiddling with my network settings or messing them up.The most obvious difference is that it is free whilst most services will charge you for access. There is however an option to pay for a premium access that comes with certain pecks but that is entirely optional. I was surprised to learn however that Hola is not and was never intended to be used as a DNS blocker. Its Israeli creator wanted to create an App that would speed up the internet and they ended up creating an anonymiser, internet speeding and DNS unblocking app.

The app uses peer routing in a rather similar fashion to the Tor network so their “VPN” service is peer powered. Unlike Tor which can be rather slow at times, Hola uses intelligent routing which can be tweaked using a special scripting language to enable faster access to webpages. The result is something akin to a Tor on steroids. Whenever a Hola user accesses a webpage it is broken into little encrypted bits that are stored across the network and when a second user requests the same page it is fetched from the computers within the geographical vicinity of that user. All this caching,routing and fetching is done using the idle network resources of users in the Hola network-apparently our computers are idle 90% of the time. This means that the more Hola network near you the faster your internet connection and the more popular the service is in your area the faster you can access it.

One of the features I find useful was the tabbed VPN feature. For some reason or another you might want to access different websites from different locations. For example if you are a Zimbabwean internet user who wants to “unblock” most popular streaming services-whatever you think of the practice of “unblocking.” Hola allows you to access Hulu in one tab and the BBC player from another without the need for you to change your settings. This could also be a useful tool during web development when you want to test your site from different locations. Hola has got peers in virtually every country which means you can access your site or any other site for that matter from any country from Afghanistan to Zimbabwe.

A summary of some of the problems that we face as Zimbabwean internet users that Hola solves.

Hulu is a welcome service to folks who want unfettered access to the internet, those that think the NSA is out to get them and want anonymity on the internet and those who could do with a little speed when accessing the net.

P.S. I am not a lawyer so I am not going to give you a legal opinion on whether it is legal or not to use unblocking to access streaming content that is geoblocked. You are entirely responsible for your own actions. This article was written from a purely academic point of view and nothing in it should be construed to be in support of piracy or unlawful content access.

3 thoughts on “Hola is not a DNS unblocker”