Over the last several days, Econet announced through its website a promotion reduction of international tariff rates by up to (emphasis ours) 25% for countries in the region and to 20 cents a minute for calls to the UK, the US, China and Canada. Before this, the last reduction was in February last year. This latest round goes lower.

Ads published in the press today also announce the reduction, but unlike the internet announcement, don’t make it clear that this is just a promotion and that it will likely expire after 1, 2 or 3 months. POTRAZ should force to make this clear really!

Anyway, here are the actual changes on some of the call destinations including the savings you will make if this excites you: 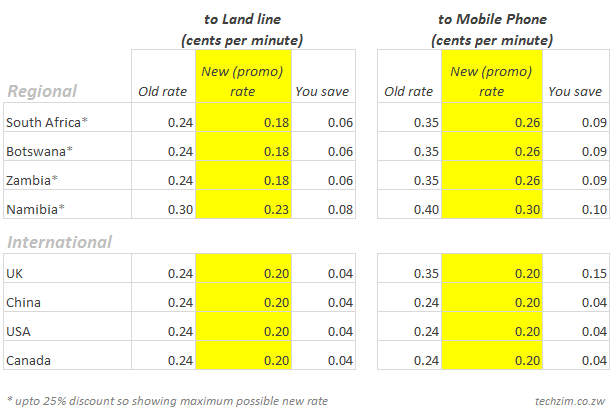 Again, we emphasise the “up to“ for countries in the region so for some of these destinations it may actually be 20% or if they’re being extra sneaky here, even 5% or less. The decrease is only marginal so we’re not too excited really. Calls at 10 cents would have been a start.

But there’s a bigger second issue. It’s tempting to compare these new rate  to the other local mobile and fixed operators, but the reality is that Telecel, NetOne, TelOne etc… are not the meanest competition to Econet’s rates right now. The internet is. And it’s unstoppably increasingly so into the future. WhatsApp, WeChat, Viber, Skype and other such internet enabled services are a bigger threat Econet’s traditional international voice revenue that Telecel and the others can ever be. Not even the new VoIP operators are that big a threat.

I can’t even remember the last time I had to call an international number using my mobile phone. It’s almost always Skype, Facebook or, if not voice, then just WhatsApp, WeChat etc… So yes, not quite exciting. Especially so as Econet itself already offers unlimited WhatsApp and Facebook bundles at amazingly low prices.

7 thoughts on “Econet slashes international tariffs. Fails to compete with its own App bundles”