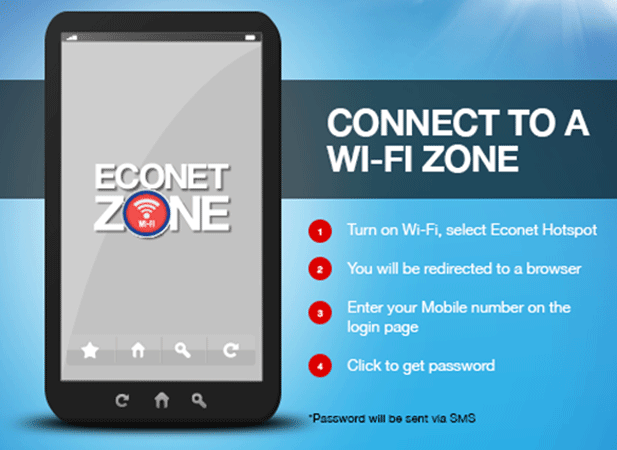 Remember the Econet Wi-Fi pilot we reported on several months ago? Sources at the company tell us the product is ready for launch now and that it will be officially unveiled this week. The name of the product is called Econet Zone (image above) and, as we reported back in may last year, it’s meant to ease congestion on the mobile broadband network (3G, Edge GPRS etc..). Such a system is called Mobile data offloading, or just Wi-Fi offloading.

How it will work?
This is not an independent Wi-Fi service. It’s for Econet subscribers. To access the service subscribers will have to connect (or automatically connect) to an Econet Zone. They will then get a password by submitting their phone number via a web page form, after which they enter the password and start browsing. See below:

How many hotspots are we talking?
At least 75 is what we counted in an app we downloaded. You can find the app here or in the play store.

Data Tariffs (price)
From what we see in the app, subscribers will be charged the same as they would on an ordinary 3G connection. Would have been great ofcourse to get some discount for helping take some load off their mobile network…

So why use it?
Incentive to use it is just speed more than anything else. So say you’re at Avondale and 3G there is slow, you then switch to the Wi-Fi network (which is probably powered by a fibre backbone) and experience much better internet.

Isn’t faster internet what 4G LTE is supposed to give us?
Well, no. LTE is proving more complicated and costly that Econet hasn’t done much on that front beyond the  the UNWTO show of two years ago. It’s still available only via a 4G  dongle and limited in coverage which makes it far from convenient to use.

Why did this take so long?
We have no idea really. Our guess is integrating WiFi hotspots to a cellular network so billing is seamless and predictable enough to not have the “my data vanished” issues, is no simple task.

Does Econet have a Wi-Fi license
We’re just putting this here as a colleague asked the question earlier today. First, there’s no such a license, but it’s generally something that ISPs like ZOL and YoAfrica have been doing these past several years. We don’t think Econet will have an issue with this really. Remember the Econet Group has an IAP license through Liquid Zimbabwe, so they are as licensed as it can get. But even if they didn’t have Liquid, they recently paid $137.5 million for a license whose goal posts may be shifted this year. Who and why would anyone deny them some leg room for a grey area they venture into?

What do we think?
We love the service. Like we said though, a discount on the Wi-Fi data would be even better but from a making the 3G more less congested as well as having an alternative when in an area they have a hotspot, it’sa brilliant product. Something tells me people that connect to very fast hotspots will think their data’s being stolen…

39 thoughts on “After almost a year of trials, Econet to now launch offloading Wi-Fi Zones”