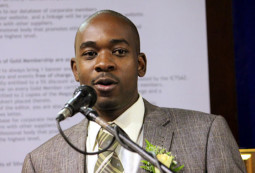 It’s been 9 years since the Zimbabwean government made a pledge to come up with legislation to curb cyber crime. Of course, there’s no point in holding on to political pledges really. It’s just that it helps give a clear indication of how long we’ve been kicking an issue around.

Now that we are in 2015, what has been done to make this a reality? Today we attended a round table discussion on the crafting of the cybercrime bill. The event (hosted by Media Centre) was meant as a discussion point for the potential impacts of the cybersecurity bill on freedom of expression, access to information and the right to privacy to general citizens and the Civil society.

It was opened up to different stakeholders in ICT and cyber legislation like POTRAZ, media practitioners, Internet Service Providers and bloggers. Unfortunately, the ISPs and POTRAZ didn’t show up, however, there was representation from legislature.

The main delivery was made by Nelson Chamisa, the former Minister of ICT and current chairman of the Parliamentary Portfolio Committee on Communication Technology, Postal and Courier Services.

Besides running through the basic aspects of the proposed bill and emphasizing how the bill had to come after a new Zimbabwe ICT Policy, he spelled out something that most of us expected for a while now. The Zimbabwe ICT Policy isn’t going to be ready anytime soon.

It’s rather disappointing when you consider all the work that was put into this policy since 2012 when Chamisa was still at the helm of the Ministry of ICT.

Apparently there were some aspects of the draft policy, some in line with cyber security that needed to be revised. After years of recommendations and consultations with stakeholders, our ICT Policy is being redrafted, again.

Besides the holdup on the drafting of a bill on cyber crime, this hinders any legislative advances we might hope for Zimbabwe. We are currently using a National ICT Policy from 2005 yet there are countless changes that have occurred in ICT that have national implications between then and now.

Issues such as e-governance, an ICT policy for education, e-commerce, communication, and national security (which dovetails into the proposed cybercrime bill) have gained a lot of prominence in the past decade. Yet it seems that our legislation doesn’t see the need to act quickly to address these issues.

Have the citizens lead and the state shall follow

Forget about support from legislative constructs or from the State. if you want to do something in ICT, its best to roll it out, gather enough traction on a national scale and have the government address your area of influence when they realise its impact.

This looks like the only approach really. It’s what has been the modus operandi of every service provider when you look at it.  This will work as long as what you are doing doesn’t infringe on any national security violations.