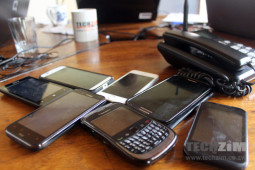 Don’t let those astounding numbers on Zimbabwe’s mobile phone penetration rate (90.3% in the last quarter) fool you, when it comes to using phones for broadband, we are not as advanced and are far from “smart”.

According to Econet’s latest financial results, the smartphone penetration on its network is approximately 15%. That’s pretty close to the national figure, largely because of Econet’s massive chunk of mobile broadband subscribers. POTRAZ, the regulator doesn’t issue that so we estimate it to be hovering somewhere close to that 15%.

This means that the majority of mobile communications are conducted via feature phones and basic cellphones with the actual smartphones accounting for a small portion. Simply put, smartphones are not yet as popular, or rather widespread, as we all would like to believe.

There are three basic categories of mobile phones; the “dumb phone”  aka mbudzi,  the feature phone and then the smartphone. The dumb phones provides the basic functions like calling and messaging via SMS. A feature phone has a fixed set of functions beyond voice calling and text messaging (PC Mag) such as web browsing and email.

A smartphone on the other hand has all the other features you would find on a computer with the added advantage of mobility. The difference between a smartphone and a feature phone is becoming more and more difficult to tell which augurs positively to the data consumption statistics possibly encroaching to 20%.

What does this 15% mean really?

The realisation that there are not that many of us with smartphones revealed a number of sobering conclusions. Firstly if these stats are indeed true, MNOs with all their “investing in infrastructure and expansion” should really be in no hurry to upgrade to data enabling technologies like LTE/4G.

This explains the slow movement we’ve seen into 4G rollout and also raises questions on NetOne’s strategy with its $200 million 4G/LTE drive.

I am inclined to believe that we are still to exhaust the capacity created by the current networks. If anything, the cost of expansion will really go to coverage and voice carrying rather than data.

Secondly, in as much as ISPs were laying spaghetti fibre networks across the entirety of the country, it is possible that this new capacity would be largely idle were it not for voice. I strongly feel that we now have a huge backhaul network that is underutilised and has not found a retail plan to match the investment.

This could be possibly why data is still very expensive. Given the fact that internet consumption is largely via mobile devices, it is telling that with the 15%, consumers are largely not “biting”.

There have been concerted efforts to roll out FTTH solutions but the current pricing of common WiFi offloading such as the TelOne’s $1 for 100 MB shows that we are not yet we would desire to be.

We can, of course, talk about the broadband consumption by corporates, but that only goes on to prove that after working hours that capacity is largely idle.

Thirdly, to the developing ICT community, it means that if you are an entrepreneur and you are looking to develop the most widely used VAS services and you have based it on data consuming mobile applications, you are most likely going to service a fewer constituency than 15% of mobile phone users.

This is evidenced by the fact that we cannot track the successes of most applications developed locally and downloaded on the various play stores for Android, iOS or Windows (the major smartphone OS).

A look on the non-smart side of VAS provision will, however, tell a different story. A good example is how the combined total of Zimpapers and Alpha Media news applications can easily boast of over 500,000 subscribers via SMS.

While WhatsApp sounds great and everyone seems to have it, it is in fact lesser than 15% of phone users who have it. Though subscribers may not be initiating use of SMS, the platform as a delivery (receiving) channel is clearly more effective.

8 thoughts on “What does Zimbabwe’s insignificant smartphone penetration mean?”