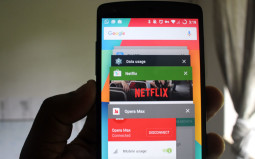 Today, Opera announced that they will be discontinuing support for their mobile data saving application Opera Max. In the announcement, they also stated that the app has been removed from the Google Play Store and will no longer receive upgrades. Opera says “The product had a substantially different value proposition than our browser products, and represented a different focus for Opera.”

Opera will now be focusing more on their browsers and other services they plan to bring to people. Those of us who already had Opera Max installed will still be able to use it for an unspecified period of time. According to the company, users will be informed about the termination of server side support in due time. The termination of server side support would result in the installed app no longer working at all.

Opera Max was initially released in 2014. It allowed people to manage their data usage in hopes of actually reducing it. The great thing about Opera Max was that it worked for all apps on an Android smartphone. Even though Opera Mini existed and it was great for data saving, it had one drawback. It left the other apps on a smartphone to use as much as they wanted.

Due to that, Opera Mini ceased to be the one stop shop of data saving. Fortunately, Opera Max filled that void and provided a more complete data saving system. With Opera Max, you could set which app could use background data for both mobile data and Wi-Fi. This type of control to many was better than using the standard background data restriction feature which comes with most Android phones these days. The standard background restriction of Android phones restricts all apps from using background data and we all know some apps are far too important for communication purposes or other reasons to be restricted that much.

Other than data saving, Opera Max also featured a privacy mode which allowed people to shield their online activity behind a virtual private network (VPN). All this came in a free app with no strings attached and it was quite an easy app to use for that matter. It’s sad to see such a useful app get shut down out of nowhere.

The app may still show up in your Play Store as it takes time for Google to remove it from all the versions of the Play Store in different countries. I currently have it installed and will probably keep it until it stops working completely because it’s been such a useful app when it comes to data saving.

Let us know what you think. Are you sad to see Opera Max get discontinued or you never used it at all? If you used it, what did it offer you that other apps didn’t?