With technology advancements and as pretty much everything digitises, the threat of being ‘hacked’ constantly faces us. Not that we should fear this change since to be fair whether we remain archaic or not, we will indeed always be faced with some big threat in one way or the other. The best we can do is identify these threats and continuously figure out how to curb them.

Also, in Zimbabwe it then doesn’t help the case that we’re in trying times. Instead of progressive innovation, people are ever trying to find ways in which they can manipulate systems in order to survive… either way, not justified!

Of late, a message has been circulating on WhatsApp on how some couple is duping people into thinking they have already paid for the goods they are ‘buying’ via EcoCash. Just in case you haven’t come across it, let me tell you how they are doing it.

We all know how EcoCash can sometimes delay confirming a payment right? Whether via SMS or by adding the amount to your balance so that at least even if you don’t see the SMS immediately, you can at least check and confirm the payment through your balance.  Now someone figured that to be loophole and chose to exploit it.

The person also took advantage of the trust that we have in the SMS system. We generally believe that there’s no way of manipulating the sender nor the contents of an SMS as you could do on these other messaging apps. Therefore, whenever someone shows us an SMS confirming something, all doubts generally fly out the window unless of course you really don’t trust the person showing you the text or are paranoid.

But, unfortunately (or fortunately) there are applications that can be used to generate fake SMS. On such apps you can customize not only the text, but the contact of the text like so: 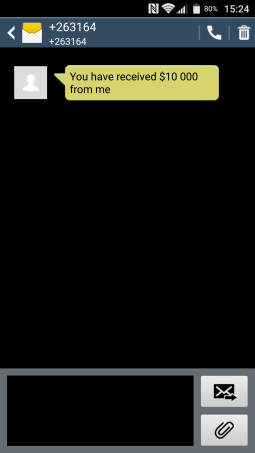 So now bearing those things in mind, a couple decided “hey wait, why don’t we go around ‘shopping’ using EcoCash and trick people into thinking we’ve paid by showing them this evidence?” and as it turns out they went for it. They then found a fake text generating app on Play Store or Apple Store (lest you think I’m discriminating) and then started ‘making payments’.

The couple basically shows (oh yes it’s in present tense because they are still at large) the retailer an SMS which indeed looks like it’s from +263164 stating that a payment of the stipulated amount has been paid. Then maybe wait a few minutes and complain about the network being slow and naturally, the retailer will release them on the premises that (s)he will receive the SMS too at some point but well, the SMS never arrives.

We don’t know how many have fallen victim of this, if at all, for all we know it might just be fake news meant to ‘cause alarm and despondency’ but hey glad we have a full ministry to protect us from such 😉 Nevertheless, regardless of authenticity, it’s only fair that people are warned. Besides, it’s not like one now needs to take some drastic measures to protect themselves from such scams which are obviously not being carried out by just that one couple.

So to protect yourself, all you need to do is wait. Wait till you receive that SMS from EcoCash notifying you that indeed you have received such and such an amount from so and so. That is exactly why EcoCash made it a ‘two-step verification process’ DO NOT take shortcuts, just trust the the process no matter how redundant it might sound or be.

However, on EcoCash’s part, we do believe that the network upgrade Econet is carrying out will go a long way in ensuring that EcoCash has less downtime or such complications, seeing that it’s these ‘little things’ that facilitate such fraudulence behavior.