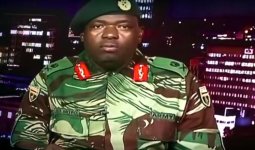 You have no doubt been following the whole situation with the military implementing the National Democratic Project. You have heard that the president is under house arrest and several other top politicians have been taken into custody. This information and more has been distributed over the internet.

For most of us, story links, images, photos and videos are only available on social media.

The Zimbabwe Defence Forces through General Chiwenga addressed the nation and announced that they would be stepping in to remove the criminals around the president who are committing crimes that are causing social and economic suffering in the country.

That right there is news but what did ZBC and The Herald do with that news? Nothing. They did not publicise the address. They pretended nothing had happened. The Herald only then published responses to the address by individuals and organisations all speaking against the the military’s move.

Major General Moyo said this about the Herald and ZBC,

Fellow Zimbabweans, following the address we made on 13 November 2017 which we believe our main broadcaster, ZBC and The Herald were directed not to publicise, the situation in our country has moved to another level.

If you needed further proof that The Herald reports on news with a bias, there it is, as Major General Moyo noted. Most of us gave up on ZBC TV a long time ago. Biased reporting and terrible programming all around made that decision all too easy to make.

The fact remains though that there is a good number of Zimbabweans who do not have access to ZBC TV’s alternatives like Kwese TV and DSTv or even just the internet for services like Netflix and news. If someone relied on just state media for news they would only have gotten to know about the military takeover much later than it happened.

For those with Kwese or DSTv, they could follow the news on the many news channels on both pay-TV services.

The military actually had to take over the ZBC for the message to be aired on ZBC TV this morning.

The above scenario meant that for us ordinary Zimbabweans to get the news as it happened we had to look to social media and online publications.

The above mainly pertains to state media but print media as a concept is fast becoming obsolete.

Print media has the inherent disadvantage that they cannot report on the news as it happens as they cannot print a new paper every time there is a new development. They may publish a special edition paper maybe in the afternoon but they will be providing stale news by then as social media would have distributed the news within minutes of it happening.

Print media requires heavy investment and goes through a rigorous licensing process which means in the end there are wealthy individuals or organisations in control. These persons will usually steer the news reporting in the direction they want. The Herald being the case in point. News was filtered to suit the interests of individuals.

Absolutely no one controls what is shared on social media and that meant that within moments of General Chiwenga making his address we all had the video in our phones, the same video that The Herald and ZBC refused to publicise.

We knew about army tanks on the streets as soon as they left their barracks because social media allows there to be real time reporting. No editors sifting through the footage trying to find the angles they can take to support their own beliefs. This is probably the biggest advantage social media has over print media, real time unfiltered reporting.

Social media is not perfect though. Its strengths are also its weaknesses. No one is there to verify the news as sent out and so there is the risk of fake news spreading. Some have taken to WhatsApp to shamelessly create their own accounts of the situation in this country. It can be difficult to know what is true and what is false sometimes.

So the problem with social media is that the burden of responsibility rests with everyone involved. It is then given that false reports will spread, some just can’t help it. Some will report their own predictions as facts. You can follow these social media accounts to get more reliable reports.

In our current situation though, social media served us better than state media. Print media just could not compete.

With addresses coming in the form of live streams, access to the internet becomes important.