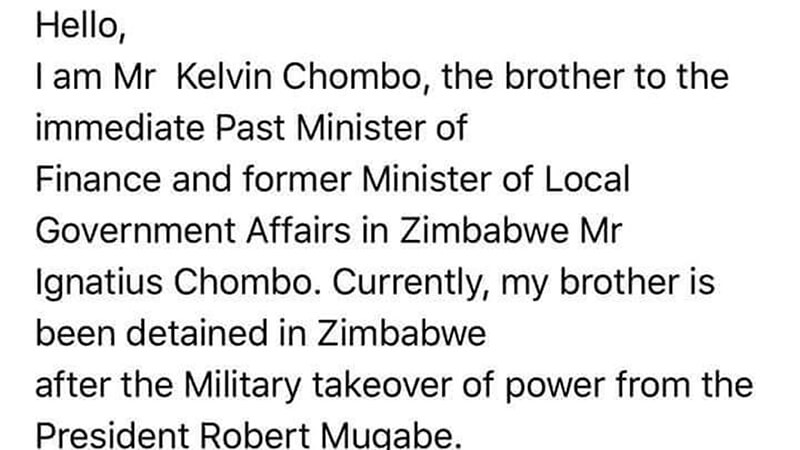 Ignatious Chombo, the former Minister of Finance, who was arrested during the “coup-not-coup”, has made it to being the subject of 419 scammers looking for assistance to “get money out of Zimbabwe.”

An email circulating currently, shows that one Kelvin Chombo, an alleged brother to the currently incarcerated former Minister, is seeking help transferring money from a UK “financial house” account because his family is under political pressure.

There is no mention of what the sum of money being needed to be moved is, but judging by the news that has been circulating recently, Chombo’s house was said to have been raided and US$10 million was found in the house and the person sending this email will probably state a figure in that region.

The email being sent is shown below:

Hello,
I am Mr Kelvin Chombo, the brother to the immediate Past Minister of Finance and former Minister of Local Government Affairs in Zimbabwe Mr Ignatius Chombo. Currently, my brother is been detained in Zimbabwe after the Military takeover of power from the President Robert Mugabe.

I write to seek your assistance to move a certain amount of huge fund which my brother stored in a Financial House in UK to your account because of the political pressure in our country and my family now. If this request shall please you I will give you more details and schedule an important meeting with you as soon as possible.

Be rest assured that your interest on this project shall be negotiated.

For those that may have come into contact to this email and are considering making a quick buck by ‘helping’ this here fellow, something easier would be to just get that money of yours and a cigarette lighter and burn that cash. You’ll get more joy and satisfaction out of that.

I’m not connected to Ignatious Chombo, but the Kelvin Chombo found on Facebook looks a bit too young to be his brother. But not to go by a Facebook profile alone, a common 419 scam is usually embodied with poorly constructed sentences in English. “Currently, my brother is been detained…“, “a certain amount of huge fund which my brother…”, are signs that the person sending this has a poor command of the Queen’s language, something that can not ordinarily be said about Zimbabweans (shame on you detractors who may think otherwise).

A number of questions come up and it needs people to ‘stay woke’ but one of the best responses that I’ve found to such messages is to spare a couple of minutes a day to send the authors of the email on a ‘merry go round‘.

I’m not sure whether we can celebrate as a nation how characters in our country are being used in scams but what’s certain is that we all need to stay vigilant. Thankfully, we set up a joint Ministry to watch and monitor such and safeguard people, hopefully, it will be doing more than just being a WhatsApp-policing unit.

5 thoughts on “Chombo Makes It To 419 Scammers Methods”