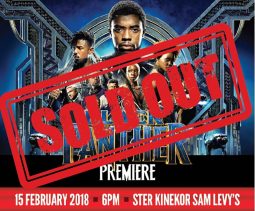 Imagine that. At $12 a pop Sterkinekor Sam Levy in Harare has managed to sell out on all its tickets for the Black Panther movie premier. Even Captain America Civil War with how how impressive it was has been trumped by the all black cast Black Panther.

The movie will be premiering tomorrow the 15th of February which is tomorrow so you can buy a ticket from Sterkinekor Bulawayo and take a flight after work to The City Of Kings just in time  for the 6pm premier.

Check out what some critics are saying about it!

Virtually everything that distinguishes “Black Panther” from past Marvel pics works to this standalone entry’s advantage.-Variety

Like Taika Waititi before him, Ryan Coogler gives the Marvel template a bold auteurist twist with an African extravaganza that packs a muscular intensity and challenges as much as it exhilarates.-Empire

Boseman, who strides through “Black Panther” with unforced, charismatic ease, assumes almost Shakespearean levels of doubt as his character is challenged by an unexpected rival.-Washington Post

A jolt of a movie, Black Panther creates wonder with great flair and feeling partly through something Hollywood rarely dreams of anymore: myth.-The NYTimes

Biggest local interest has arose from the presence of Danai Gurira as one of the stars of the show being seen as the crown jewel of Zimbabwe. Whose going to watch it with me?

2 thoughts on “Black Panther Tickets Get Sold Out!”