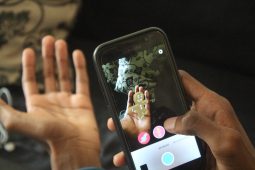 Google has followed in the footsteps of Facebook in adding an augmented reality mode in its Motion Stills application. Motion Stills is an app that enables you to take short videos and transform them into GIFs and fast-forward videos with an advanced stabilization feature. The app is basically a GIF camera with fancy software tricks.

In the default mode, you can capture a three-second looping clip. The app has really powerful stabilization software, which ensures videos taken through the app is not bumpy and constantly  . The app also has an interesting Fast-Forward mode. In this mode, you can record up to a minute of fast forward footage.

Yes, the video is a bit bumpy but that’s mostly because software stabilization is no match for Zim roads.

More excitingly, Google just introduced AR Mode. Users can now insert animated 3D objects into the real world before recording. The app then sticks the animated 3D object on any surface, even moving ones e.g your hand or head. Motion Stills isn’t as advanced as Facebook AR Studio which allows users to create 3D Objects they can then use in their own videos.

Office printer was under attack

Motion Stills works on any device with Android 5.1(Lollipop) and above. The phone also has to have a working gyroscope sensor. Let us know if you’re an augmented reality fan who will be using Motion Stills to create awesome videos.