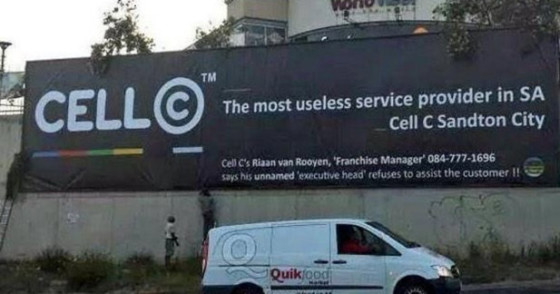 If you have been following the Telecel story over the past few years you’ll know that the mobile network operator isn’t doing so well. Everything that can go bad for Telecel has been going bad; from debts and bad leadership to subscriber numbers that keep falling, it’s pretty difficult to see where the nightmare ends.

Cell-C is said to be in serious trouble owing to huge debts. R8.9 billion (US$61 million) if we are being precise – which isn’t made any better by the fact that the company lost R1.2 billion in 2018.

The current debt, however, is actually lower than it was when Cell-C majority stakeholder (Blue Label Telecoms) announced plans to lower debt from R20 billion to R6 billion back in 2017.

Though the debt has been reduced as promised, this doesn’t mean investors are buying into Cell-C’s plans. The MNOs share price has fallen by 78% in two years. Yikes…

Just like Telecel, Cell-C has a hard time covering the entirety of South Africa, even though they have around 16.3 million subscribers – a number that can’t be reached by any local MNO (in the short term).

In fact, in order, Cell-C roams on MTNs in areas where the company hasn’t built infrastructure itself. The company is also said to be considering having MTN manage its network in order to cut expenses but it’s not entirely clear if this arrangement would make it past regulatory hurdles.

There are some differences…

Though both companies are in trouble, Cell-C and Telecel are not entirely the same.

Unlike the local MNO, Cell-C isn’t embroiled in a half a decade old ownership strangle. This means Cell-C is in a position to change leadership when the ship is sinking; as it did when former CEO Jose Dos Santos last month.

Another difference between the two telecoms players is that Cell-C is still attractive to investors. Blue Telecoms announced that The Buffet Consortium would be buying a minority stake in Cell-C the same day that the MNOs former CEO stepped down. Though this is not a guarantee of good fortunes, it’s an indicator that things can be turned around.

Unfortunately the same cannot be said about Telecel. Thegovernment which owns a majority stake in Telecel hasn’t mentioned the MNO when they talk about privatisation. Instead, they have mentioned their more competitive telecoms businesses, TelOne and NetOne. Considering the current state of Telecel, it’s an extremely hard sell and I would be surprised if it ended up being one of the companies that privatised.