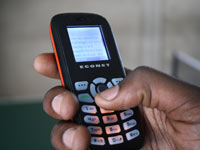 Cassava Fintech has heard your complaints about promotional spam messages of its Sasai app and they have apologized and fixed the issue. Company spokesperson said:

The instance of several messages received by some customers as part of the ongoing SASAI $10 million Chaka-Chaya paSASAI promotion has since been rectified, and SASAI regrets any inconvenience caused.

The complaints had even got the attention of the telecoms regulator, POTRAZ who then promised to engage Econet. Cassava says the bombardment of spam messages came as a result of wanting to increase winning chances of spam recipients in the Chaka-Chaya promotional draw that was held this past Wednesday. What an ugly and annoying way of increasing the odds in favour of participants. Cassava’s spokesperson went on to say:

Messages raising awareness about SASAI had been going out before, but because of the promotional draw yesterday afternoon, some customers that have many friends who have downloaded the app, started getting several messages inviting them to try the app and so increase their chances of winning something in the draw

Also read:Deep Dive Into The Sasai Platform: Part 1 – Will It Work? It’s Simple!