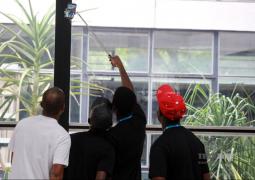 Sasai’s latest update brings with it a new feature dubbed “Moments”. Moments has it’s own tab within the application and the best way I can describe it is as a social hub where users can upload posts, pictures, videos and audio notes.

In the press material shared with us by Cassava representatives, the vision within Sasai is for the application to “be driven mostly by user-generated content along the same lines as TikTok.”

A particular section of the press material caught my eye. It reads;

The Moments feature will include official pages for public figures and for corporate organizations, such as private businesses, public enterprises, civic associations and faith-based organizations.

At first, I thought this isn’t a great way to pitch a social media platform to the general public. I might be mistaken but people want influencers and in-vogue personalities on these platforms first before we talk of business, enterprises and civic associations. In fact, all the above usually follow come to these platforms once people have joined and not the other way around.

Anyway, I then realised that the new feature is actually being pitched to businesses as a significant portion of the press material is dedicated to them;

Corporates can now engage with their customers on Sasai in a richer environment through Moments, where they can use pictures, videos and online links

Upon opening Sasai Moments for the first time I was greeted by a post by Strive Masiyiwa (the Econet Chairman) and considering that he has a huge following and influence I assume this might a deliberate move to get that following to interact with him via Sasai.

It seems the feature will be rolling out in phases as I got a pop-up notification that the feature would be going live soon.

All things considered, it’s no surprise that Sasai is adding this social aspect since they have Super-App aspirations. Other Super-Apps like WeChat have similar features in addition to direct messaging.