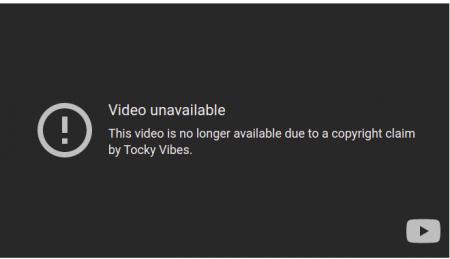 This weekend it was NashTV and their now very popular YouTube channel that was involved in controversy after some of their “unfair” contracts with musicians leaked. Now there is another YouTube centred dispute between two popular musicians Tocky Vibes and ExQ both of whom have active channels on YouTube.

According to 263Chat, the two musicians are now locked in a battle that has seen ExQ’s popular single Wakatemba being taken down on YouTube after Tocky Vibes claimed copyright. Both the official audio and official videos appear to be taken down as they are no longer available on ExQ’s YouTube channel. Both audio and video no longer turn up in results when you search for them on YouTube. The song however is still available on Spotify where it is credited to ExQ

After creating Wakatemba, Tocky Vibes and ExQ agreed that they would collaborate on a Tocky song. However, Tocky says ExQ’s camp reneged, and are refusing to honour what they agreed on. Now Tocky Vibes has made a copyright claim to YouTube and Wakatemba has been taken down.

It is well known that the song Wakatemba was a collaboration by the duo. Normally when that happens musicians enter into an agreement as to who has primary copyright to the song. In this case, it seems the agreement was that this was ExQ’s song and Tocky Vibes would get to collaborate with ExQ at a later date on a song that would be Tocky Vibe’s song. That hasn’t happened and Tocky Vibes seems to have retaliated by asking YouTube to take down ExQ’s song and for now, it seems YouTube has obliged.

The longer the song stays down on YouTube the more pirates seem to be profiting. These are individuals that download a video and reupload it as their own. Several versions of the song have already been uploaded in the past few hours perhaps in the wake of news that the official had been taken down.

YouTube does have a way to thwart this using their technology called Content ID. The copyright owner uses the tool to register their work, YouTube then creates an ID of the registered work in it’s database. It then trawls through YouTube looking for duplicates. It takes time for this to happen but eventual when a duplicate is discovered the copyright owner can just choose to monetise the video themself instead of having it taken down. This means whatever revenue the pirate stood to make now goes to the actual copyright owner.

It’s not clear whether this can happen. This is a case of disputed copyright. Which probably means it might not be possible for either ExQ or Tocky Vibes to use Content ID which will mean the pirates having a field day.