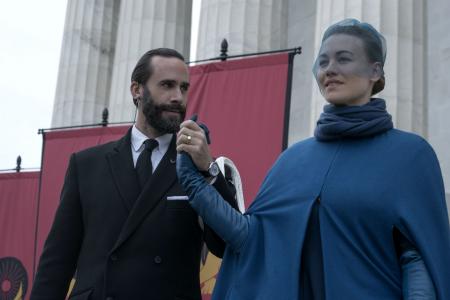 The Handmaid’s Tale is one of those brilliant but polarising productions- you either love it or hate it. There is no in-between. I should at this point say that I hate it. I think it’s a shallow, blinkered and cheap, maybe not unwarranted, dig at religion in general. Although it does have its redeeming qualities. It’s not hard to see that it is based on a rather dated book despite the producer’s best efforts to modernise it. My wife on the other hand absolutely loves it.

Last week, on 28 April to be exact, Hulu, the makers of the series released the first three episodes of season 4, the latest and current season of the show. As always the besotted fans of the award-winning show are full of nothing but praise. But if you are in Zimbabwe, how do you legally watch a show from Hulu, which is restricted to the US and Japanese residents?

There are actually two ways.

The easiest way is to use Showmax of course. The service goes for US$7.99 or US$2.99 if you just want the mobile version. DStv Premium subscribers can even get the service for free, all they need to do is link their DStv account with Showmax during the signup process or at a later date.

For this price, you get access to past seasons as well as coming episodes of The Handmaid’s Tale as soon as they are released. As an added bonus you can also watch a lot of other shows from HBO, Nickelodeon, Disney and ABC among other studios.

This method is easy because there are no VPNs, unblocking or some workarounds involved. If you have a Smart TV or TV box you can easily download the Showmax app, login and you are good to go. Most people will find that easier to do compared to the second method.

The not so easy way

The first three seasons of The Handmaid’s Tale are available on both Channel 4 and SBS Australia both of which offer free legal ad-supported viewing. The problem is that this access is limited to the United Kingdom and Australia respectively. So all you need to do is to appear as if you are from Australia.

You either need SmartDNS or a compatible VPN. I have always been a fan of the SmartDNS method as it’s less messy and if you choose the right provider your speed will not be affected. All you need to do is sign up for a service and change your DNS servers. Alternatively, you can connect to an Australian VPN server that has not been exposed and blocked by SBS.

Once you have the VPN or SmartDNS, you need to solidify the ruse by changing your browser’s Time Zone. You can achieve this Chrome add-on for example. There is a version of the add-on for Firefox. I could never get this to work in Firefox for some reason although it has been a while since I made my last attempt.

One thing to be mindful of when doing this is that changing the timezone in your browser result in you stumbling across subtle bugs that might degrade your browsing experience when using other sites and services. For example, WhatsApp web will not work if you change your browser timezone settings. After all, it makes little sense that a person in Australia would be attempting to use WhatsApp web on a phone in Zimbabwe-right.

Anyway, SBS does have the latest episodes of The Handmaid’s Tale and so if you do manage to connect to their service the right way you will be able to view the series legally for free although doing so will require technical skills that maybe beyond most ordinary computer users.

As I said, my wife is a fan of the show, we already have Showmax and I do think it’s your best and easiest bet although I was able to test the second method and can confirm it does work. The fact that it’s free is made mute by the fact that you will have to pay for SmartDNS which goes for about $5.00 per month depending on the service and your preferred billing frequency.