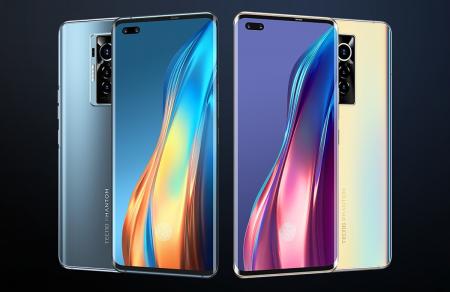 Tecno today lauched the Phantom X which is set to be their most premium smartphone in quite a while. It’s targeted squarely at the more established brands like Samsung and Xiaomi but staying true to type, it will be focusing on the African market meaning the price will be lower than the competition.

They did not cut too many corners on this one. It has a frosted glass back with a triple camera setup. The main one is a 50MP sensor which is LARGE. In fact the physical size of the main camera lens it larger than the lens on the Huawei P30 Pro so photos should look very impressive on it.

The sensor also had Dual Pixel autofocus which was first introduced in Samsung flagships and offers fast and accurate autofocus when taking photos. It also had laser autofocus to assist the camera for better low light performance.

One of the 2 remaining sensors is a 13MP portrait camera with 2x optical zoom which is a first on Tecno smarphones. Previous Tecno smartphones only used digital zoom.

The 3rd camera is an 8MP ultrawide with a very generous 120 degree field of view for those group shots or dramatic landscape shots. Selfie cameras are in a pill shaped cutout on the display with a 48MP main one and an 8MP ulrawide for group selfies.

The display itself is a 6.7 inch FHD+ SuperAMOLED display with very steeply curved edges. Steeper than the ones on the Huawei P30 Pro.

Okay so I have referenced the Huawei P30 Pro several times now. This is because 2 weeks ago the generous guys at Tecno allowed me to take a look at the Phantom X at their offices and my Huawei P30 Pro is the only smartphone I had to compare it with.

Now that we have cleared that up. Not only is the display brighter than the P30 Pro, it matches it when it comes to vibrance and sharpness. it is a flagship looking display. It also has a 90Hz refresh rate so animations just flow like water.

One corner that they cut is not going all the way to certify the display for HDR10 or Dolby Vision. But if they had to choose between a high refresh rate panel and an HDR certification then the 90Hz was the right choice. There is also a fingerprint on the display for those that could not find it on the back.

The Phantom X will be running Android 11 and storage options will be 8GB of RAM and 256GB of storage. Running the show is a Mediatek Helio G95 CPU with a Mali-G76 MC4 GPU to take care of gaming as well as video filming and playback up to 4K. Yes, the Phantom X will shoot 4K video.

The battery is 4700mAh which is a bit small considering we are used to 5000mAh units in Tecno’s. However this one is equipped with 33W fast charging which is faster that the Samsung’s fastest charging standard of 25W. Something to brag about. This 33W charger will get the Phantom Xs’ battery from dead to 70% in 30 minutes.

I have to say when I was allowed the few moments i had with the Phantom X it felt like they restored balance in my universe. When I reviewed the Phantom 6 Plus back in 2017 I called it the best camera phone you can get at the time. But it was more than that. It had a flaghip build quality that was very comparable to the best crafted hardware of the time. It had the world’s first 10 core processor from Mediatek so it was pretty powerful. The software experience was lag free and the price was less than half of what the competition asked for at the time.

To me the Phantom 6 Plus was an undisputed flagship killer in every way. And I feel the Phantom X is taking over where the Phantom 6 Plus left. An all round solid performer for less than half the price of the competition. Granted it’s missing some features like an IP rating, wireless charging, NFC and an HDR certification for the display but really only 1% or less of the market will know or care about those shortcoming if the price is attractive enough.

The Tecno Phantom X looks to be a flagship killer on paper. I cannot wait to have it for a full review and actually compare it in the real world with my Huawei P30 Pro.