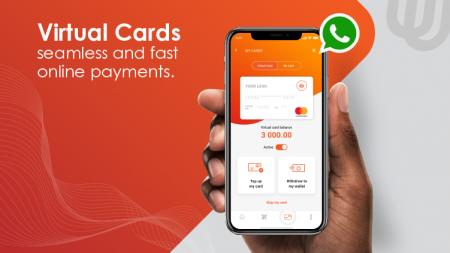 Last year, South Africa’s telecoms giant Telkom, launched their own equivalent of Ecocash called Telkom Pay except it’s much better. It takes all that is good about EcoCash and adds a couple of features that make me green with envy. The best feature in my book is the fact that Telkom’s service is based on WhatsApp. Not only does this mean you don’t have to install anything it also means you don’t have to deal with the pain that is USSD.

The only edge that EcoCash had was the fact that it allows you to generate virtual MasterCards that you can use to pay online. Now Telkom Pay customers can now do that too. Recently Telkom Pay announced the service in a bid to capitalise on the surge in e-commerce brought about by the pandemic.

I don’t say it often enough, I hate USSD services general and absolutely loath them when they are used in relation to payment services in particular. The EcoCash data app is among the first apps I install whenever I switch to a new phone. I mean have you tried sending money using USSD ZIPIT? The pain of entering account numbers is unbearable and then there are the constant error popups.

My personal prejudice aside, USSD’s convenience is undoubted especially in those moments when the bundle runs out. Moreover, not everyone in Zimbabwe has a phone capable of running WhatsApp. So USSD here plays a huge role in making those services “universal”.

WhatsApp is the internet here and in most parts of Africa

Despite our hate and love relationship with the Facebook-owned chat app, WhatsApp is practically the internet for most of us. Time and time again we have seen the oversized role the app plays in our lives based on POTRAZ reports and reports from other similar regulators. It makes sense that Telkom and other financial institutions in Zimbabwe are capitalising on this popularity.

Joining Telkom Pay is a breeze and can also be done via WhatsApp thus streamlining the whole process. All you need to do is add Telkom Pay’s number 060 483 5566, send a WhatsApp message to the number, register and verify your account.

Thanks to the Instant EFT system there is already a well-functioning gateway in South Africa. You can top up your Telkom Pay wallet using EFT, in Pick N Pay or via Nedbank ATMs. Another awesome plus for the service, you don’t have to deal with cumbersome merchant codes. Each time a payment needs to be made a QR code is generated. Somebody needs to tell Fintechs this side of the Limpopo about this.

You can also send money to other users of the service or request money using a “Please Pay Me” option. Still, now awed? You can sign up for this service even if you are not a Telkom customer. Again somebody needs to tell the mobile money operators in the tea-pot shaped country this.

Launched in the wrong country

Telkom Pay’s biggest flaw, in my opinion, is the fact that it’s based in South Africa and not Zimbabwe. The service is wasted on South Africans who really don’t need it and it’s likely to just wallow in mediocrity.