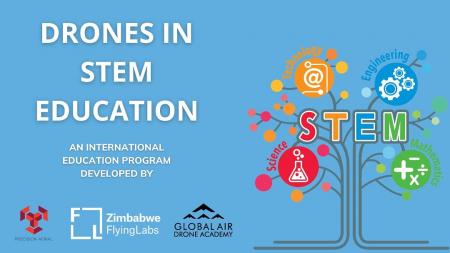 Zim Flying Labs is a name that will be familiar to Techzim regulars. The organisation came to Zimbabwe through a franchise of sorts held by Precision Aerial, a drone and robotics startup that is headed by Tawanda Chihambakwe who is a licenced drone pilot, instructor and the best selling co-author of Drone Pilot 1 and 2.

In what is a surprising and bold move, Zim Flying Labs is launching a program that will teach STEM (science, technology, engineering and mathematics) with the aid of drones.

Traditional education in the digital age is antiquated

The education system as it stands is a little outdated judging by the direction the world has been going in the last couple of decades (more so because of the pandemic). Even before that, the only place where you would learn about tax regulations was when you were already in the workforce or starting your own business. That’s, of course, if you weren’t doing commercials in high school or university as a speciality.

One of the areas that traditional education has failed is in teaching students to adapt to technological trends worldwide. Anyone born in the new Millenium is growing up in an era where technology has been advancing at an exponential rate.

Those of a certain age will remember when Nokia was the king of mobile communications and computers were rare. Rarer still was an internet connection. We might scoff at dial-up modems today, but back when the world was still pixilated, you were near as makes as no difference to royalty if you had access to something like email.

Circling back to Gen Zs and those beyond, the internet is almost a part of daily life in Zimbabwe, even if it just a WhatsApp bundle. Kids today grow up with more sophisticated devices than I or those older had in their youth. And as much as we have seen courses like ICDL among others becoming a staple there is still a lot that schools are missing when it comes to equipping the next generation of Zimbabweans to get on par or ahead of their contemporaries across the world.

Ok… but why drones?

You’d be forgiven for seeing drones as a novelty for a niche market or as something we only hear of when we read on the news of an American airstrike somewhere in the Middle East. However, the drone industry now goes beyond that. Unmanned Aerial Systems (UAS) are now in use in a number of other industries like Agriculture, Mining, Geographical Mapping and Disaster Relief efforts to mention but a few.

The use cases for drones aren’t only happening in the “developed world”, our own businesses and local authorities have been exploring drones in a number of areas. Earlier this year the government announced that its interest in using drones for border patrol had deepened. Even earlier than that, Steward Bank announced a program that would help farmers get loans to acquire drones and GPS technology.

As I am sure you have already deduced drones are still in their relative infancy in Zimbabwe and you’d likewise be forgiven for concluding that they aren’t the best tool to teach students in mature and established subjects like mathematics, chemistry, physics and the likes.

However, it is because drones are still a young industry in Zimbabwe that they are one of the best tutors of the countries future generations. What I mean by this is that all emerging and growing industries are far more sensitive to the global shifts because they are thick of it.

Drones and other newish technologies more so can help shape the perception of those who are growing up in this hyper-digital world to get on pace with what’s happening the world over far better than an ages-old curriculum.

How will drones be used to teach students?

Firstly, Zim Flying Labs already has experience in training and teaching. The organisation runs a drone pilot licencing program for those over 18 so that they can get their certification. Lastly, the program that Zim Flying Labs is going to be teaching is in collaboration with Global Air Drone Academy which has three years of experience in drone STEM education application in over eight countries and has taught over 6000 students.

The program that the two have come up with will convert the various scientific principles that students learn in class into real-life situations. This will help the students, I think, understand that geometry and mathematics are not only shapes and equations but to see that the sciences are languages that dictate the course of events.

Zim Flying labs will also be bringning coding and computer languages into the mix. I am sure you all remember the spectacular display South Korean car manufacturer Genesis did when it announced its arrival into China:

The aerial show comprised of over three thousand drones that were in a swarm and lit up the night sky with a giant Genesis logo. All of this was possible because of coding and AI which Flying Labs will be bringing into its STEM program through Droneblocks.

On top of that student’s will also get a chance to use drones in mock disaster situations. If for example there is a fire and the use of drones is needed to assess damage, extent or access points for first responders, students will need to engage their problem-solving faculties to collect data for emergency services.

Courses and cost of the program

The Zim Flying Labs Stem program has 3 tiers. The first is a beginner’s course that is for anyone aged 7 to 18. It costs US$80 for a 3 session course and drones will be provided. The entry-level is more for making students comfortable and familiar with drones and the various protocols.

The second tier is an intermediate course for anyone who graduates from the Beginner’s course and is a 10-week program that costs US$300 per student. Drones will be provided for this level but it is recommended for students to have purchased their own. The second tier is where students will get an introduction to drone coding through Droneblocks as well as the application of the sciences and other subjects like art.

Lastly, the final level is the advanced course which is open to 13 to 18-year-olds which is a 10-week program that costs US$500. The course goes deeper into depth with drone design and mechanics and handling payloads.

You can contact Zimbabwe Flying Labs for information through the following channels:

Earlier this year we got a chance to talk to Tawanda Chihambakwe from Zim Flying Labs about drone licencing and regulations as well as the future of work. You can download or play the podcast with the link below: