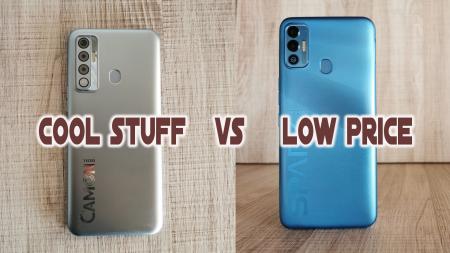 In terms of hardware the Camon 17 is just better all round. Both the processor and GPU are more powerful, the camera system is more superior, it has more memory and storage and a more fluid display thanks to that 90Hz refresh rate. A bit of a blood bath for the Spark 7 here but the more crucial question is are all these features on paper important enough for you to shell out 65 dollars more over the Spark 7?

The Spark 7 has a textured back with some tiny groves and this not only makes it very resistant to fingerprints but also it improves the grip of the phone making it much less slippery in the hand.

The Camon 17 has an even smoother back with a satin-like texture. It also does a good job with the fingerprint situation but not as good of a job on grip. It’s also a bit bigger than the Spark 7 as well so it will be that bit more difficult to handle.

While I prefer the look and feel of the Camon 17, I also prefer the grip I get from the Spark 7. But none of this really matters because most of you will put a chunky case on the phone anyway.

This is where the extra horsepower shines in the Camon 17. Starting with the display. It’s a high refresh rate panel and so animations on it are a lot more fluid than on the Spark 7. It can actually get addictive just scrolling things.

It’s not all smoke and mirrors though. The same can be said with software. Is pleasantly more responsive on the Camon 17 than the Spark 7 and its a combination of the faster processor and more RAM that makes everything run like a well oiled machine.

Now don’t get me wrong, the Spark 7 is super close on performance to a point where you won’t really notice the difference unless you really are looking for it. For day-to-day usage, the Camon 17 may be a bit more pleasant to use but the Spark 7 is not far behind. It is a lot closer than the specs and price might suggest. It’s a win for the Camon 17 but not by much.

Now the Camon 17 starts to walk away from the Spark 7. And it’s not surprising either. The Camon has a bit more focus on the camera. It outranks the Spark 7 on both the camera megapixels and the number of cameras.

With the beefier processor, the Camon 17 is also able to shoot videos in 2K vs the 1080p that the Spark 7 manages. The camera department is where the cost difference of these 2 smartphones really shows itself. Flawless victory for the Camon 17. It’s a camera phone.

Some observations I made are that the Spark 7 uses the earpiece as a loudspeaker as well so it does not sound that great. The Camon 17 also has slightly worse battery life thanks to more powerful hardware.

To sum it all up. The Camon 17 wins overall with the biggest lead coming from it’s camera and the better specs. If a good camera is worth that 65 dollar dent in your pocket then don’t even think about it. Get the Camon 17 and all the goodies it comes with.

If camera is not your main priority in a phone then the Spark 7 can do the daily tasks almost as well as the Camon 17 and that would make the Spark 7 better value for your money.

It’s worth pointing out that as tech is rapidly evolving, cheap phones are becoming good. What a $145 smartphone can do now is a lot more than what smartphones costing the same amount did 5 years ago.

The massive leap in technology has far outpaced the demands of a majority of smartphone users. And for most of the smartphone users out there, either of these phones will do a good job