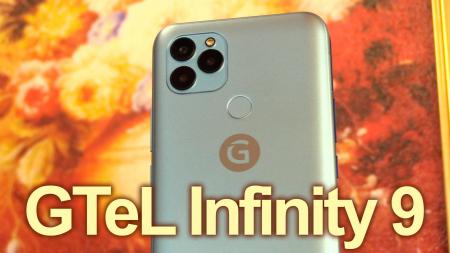 On this one, GTeL went with the approach of if it ain’t broke don’t fix it. They improved on one or 2 things from last year’s Infinity 8s and called it a day. You can watch the review and on the Infinity 9 will all the good angles below.

In the box you get a pair of wired earphones, the charging brick and cable, a semi clear silicone pouch, a tempered glass screen protector and the paperwork.

The front has a 6.5 inch HD+ IPS display with a notch up top that’s got an 8MP selfie on it. Above it is the earpiece and hidden within the bezel are the usual sensors. On the right edge is the power and volume buttons and on the left is the triple slot sim tray for your dual sim and a memory card for up to 256GB of additional storage.

On the bottom edge is the headphone jack, the primary microphone, a micro USB port for charging and data transfer and the loudspeaker grill. On the back is the triple camera square looking very similar to the iPhone, with the fingerprint scanner just below it.

The whole body is made of plastic but it’s smooth this time and not textured like on the Infinity 8s and also comes in 2 colours. A royal blue and an aqua blue. It’s a pretty standard and clean design. The only big change on the back is the camera cluster which has been moved from the middle to left and that’s about it.

The GTeL is running Android 11 and has a pretty light skin on top. One thing I love is they keep it absolutely clean. The only apps that are not stock Android apps are the FM radio, audio recorder and calculator.

There are also some subtle but nice animations whenever you leave an app. The app icon does a mini dance of sorts. I did feel like the animations were a bit sluggish so I reduced the animation time in the settings to at least make transitions feel snappy.

Transitions aside, the UI is pretty nippy. Apps launch in a speedy fashion and even though some games take just a bit longer to launch it’s nothing to write home about. It is a decently responsive phone. Feels even faster if you reduce the animation times like I did.

You also get some gestures for stuff like split screen where you swipe up with 3 fingers and pick which 2 apps you want to use on the same screen. You can also swipe down with 3 fingers to take a screenshot if the power and volume down combo is too much work. I never use the button combo to be honest.

When you grab the phone out of the box, it has all the apps on the homescreen. If you prefer a clean home screen with your apps tucked away in the app menu, you can change that in the settings. And if you have the app drawer, there is a section right at the top dedicated to the 4 most recently used apps. It can get pretty useful when the list of installed apps gets longer.

When you enable gesture navigation, the bottom left and right corners will be dedicated to summoning Google Assistant and you can summon it from anywhere, even whilst you are in  another app.

The software experience is alright. The GTeL keeps everything clean. No bloatware in sight, warm subtle icon animations and no sneaky ads baked into the software which I love a lot. But what happens when we put it through its paces? Let’s see what specs it has.

The GTeL Infinity 9 puts affordability above anything else which translates to the spec sheet as well. It comes with 3GB of RAM and 64GB of internal storage and a pretty low end MediaTek processor. Most of the budget on this GTeL seems to have gone to the 5000mAh battery and the big 6.5 inch display.

Even with such a humble spec sheet, the Infinity 9 did a respectable job. The UI is generally smooth and responsive. It does not let you wait before something happens. There is the occasional stutter when launching split screen, especially when you had a video open in an app like YouTube and in some games where the phone was struggling a bit when too many moving targets were on the screen.

The battery performance was not very impressive. It faced a 40% power drain after an hour each of gaming, video streaming and video recording. So even with a battery that is 20% bigger, the Infinity 9 lasts as long as the Infinity 8s. The price to pay for a big screen

Overall performance is fine. For this price range it’s actually pretty good and will satisfy anyone looking for a cheap phone to handle the day to day routine.

The Infinity 9 has a 13MP main camera and 2 extra 2MP cameras which essentially just add to the camera count and that’s about it. In terms of image quality though the 13MP unit takes some very good photos in the daylight. The AI scene recognition saturates colours just a little making images look more vivid and vibrant than in real life but it’s just the right amount. I have no complaints about that.

The focus is really good as well. It is very accurate. When I was taking photos it was on a very windy day but by some miracle all images were pin sharp. And when you take close up shots the sensor creates such a good separation of the foreground and the background for some awesome background blur. Very impressive background blur from such a small sensor. It’s a good camera in daylight. There is a night mode but it does absolutely nothing so don’t count on the GTeL for photos in poorly lit environments.

GTeL took some pretty safe bets with the Infinity 9. It’s mostly minor updates from last year’s Infinity 8s. A bigger screen, a bigger battery, more storage and Android 11. These are the new bits GTeL added to the Infinity 9. The price jumped up a bit too by 20 bucks to US$150.

This places the GTeL around some very stiff competition from the likes of the Tecno Spark 7 which was not as good as the Infinity 9 camera wise but better in every other department and all that being 5 bucks cheaper. It’s also in the same league with the Samsung Galaxy A10, Huawei Y7 and Xiaomi Redmi 9 which all have better software and hardware backup than the GTeL.

The competition makes it very hard for the Infinity 9 to really shine. But at least what it has going for it in Zimbabwe’s tight economy is you can pay for it in installments if you are a civil servant.

The question is. Is a good camera and more flexible payment options enough to make you buy the Infinity 9 over its competition? Let me know in the comments.