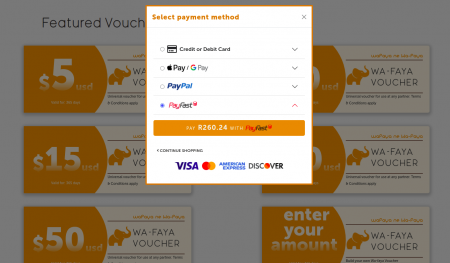 Last week we talked about how Wa-Faya was Simbisa brands igneous effort to tap into the all-important diaspora market. There was however one glaring oversight. The site only supported paying using PayPal and Credit/Debit cards. While that’s usually adequate in most situations there are a lot of people in the Diaspora that don’t have these particularly those living and working in South Africa.

Estimates vary depending on whom you ask but it is often estimated that there are about 2 to 3 million Zimbabweans in South Africa. The bulk of these people are living there in a grey area. A good number of them do not even have permits and therefore no bank accounts. It means they cannot pay for things using PayPal or Credit/Debit card.

The temptation would be to ignore these people but while not very affluent they are an important part of the Zimbabwean economy. Together with those formally employed in the diaspora they send billions in remittances. That’s not a market you do not want to ignore and Wa-Faya seems to be keenly aware of this. They have added a PayFast gateway to their site.

PayFast, a subsidiary of DPO, is a leading payments provider with tens of thousands of merchants in South Africa-about 80 000. It supports debit/credit cards, Instant automated EFTs, Snapscan as well as offline payment methods such as going into a shop like OK South Africa and making a payment using cash at the Point of Sale. All you need is a unique reference. Once the payment is made your purchase is confirmed.

Unfortunately, Wa-Faya doesn’t seem to be accepting all the possible payment methods that PayFast has. Hopefully this changes in the future. The best you can do if you don’t have a bank account is to sign up for SnapScan. You can then buy a voucher and load it into your account. Once the money is in SnapScan you can then checkout using Wa-Faya’s PayFast gateway. Hopefully, Wa-Faya will add more South African tailored payment gateways like Zappier, S Scan and Mobicred.

While PayFast is the most exciting addition PayFast has also added other gateways to their site. They now accept Apple Pay and Google Pay. At least on paper. I don’t have an Apple device and have never used Apple Pay so I couldn’t test it. I was able to attempt to pay using Google Pay and it seemed to work. Google will debit the MasterCard/Visa Card you have linked with your Google account. If you don’t have a card saved you will be asked to save one.

It seems the the-Faya site has received a couple of tweaks too. When you buy a voucher it no longer says the voucher will expire on the same day. Instead, you are given 365 days to redeem it.