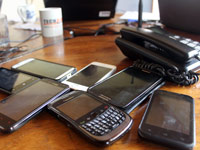 The Zimbabwe National Statistics Agency (ZimStat) in conjunction with the Postal and Telecommunications Regulatory Authority of Zimbabwe (POTRAZ), today presented the 2020 ICT Access by households and individuals. The findings were gathered through a survey of 10,325 households both rural and urban.

From that sample, ZimStat was able to get a 90% response rate, so just above 9,000 homes. ZimStat started collected from the 16th of November to the 10th of December 2020. There was also a reference period for the survey which was done three months prior to the data collection process.

89.6% of Zimbabwean households have a mobile phone

Among the findings from the Survey was that out of those interviewed 86.9% of the households in Zimbabwe had a mobile phone. This isn’t really new because it tallies with what POTRAZ reported in its quarterly telecoms sector updates.

However, ZimStat’s findings had an added dimension. Of the 89.6% of households that had a mobile phone, only 58.8% reported that they had a smartphone. This is particularly surprising because of the price of gadgets these days.

There are, of course, budget or entry-level devices on sale like those made by Itel and Tecno. But looking at how the local currency has deteriorated along with incomes dwindling in comparison to the price of goods and services. I was expecting that figure that be lower than that.

On the other hand, it shows that Zimbabweans are a resilient bunch because if they cannot source a device locally, the diaspora is a possible avenue for these devices to enter the country. Moreover, Gen Z is now well into the age where they will need a smartphone as a standard tool, what with e-learning taking centre stage during the height of the pandemic last year.

Bulawayo and Harare Provinces had the highest proportion of respondents who reported that they have smartphones at 88.2% and 80.5% respectively. Only Mashonaland East, Mashonaland West, Mashonaland North, Mashonaland South and Midlands were above 50% with the rest in mid-forties. Albeit unsurprising, it reflects that there is still some way to go to bridge the technology divide in the country.

2 thoughts on “58.8% of Zim households have a smartphone – ZimStat”