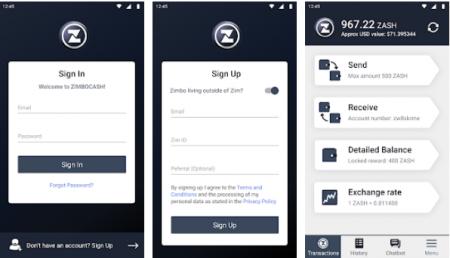 Zimbocash, the company that is pushing to be Zimbabwe’s “sound money solution”, has finally launched a mobile application on Android. The launch of the app has taken a bit of time and was something that I thought might be a bit far off after the crypto went down last year because the team at Zimbocash had to bolster their KYC requirements to fight off people who were circumventing the previous system.

The only sign that the app might be in some stage of development was a brief comment about it in Twitter Space the Zimbocash team held in September. The vagueness might have been an effort to manage expectations because after it went offline last year, the last thing its returning customer base needed was a deadline that the company couldn’t meet.

The application itself looks much like the web version of the service. It seems like the Zimbocash team prioritised function over flash. The app works better than I expected and the new Two-Factor Authentication (2FA) feature that the company rolled out in conjunction with the application is baked in rather well.

“We have enabled two-factor authentication (2FA) on all of your payments. You can set this up by going onto your account and setting up the payment pin. This second factor of security makes it much harder for someone to steal your ZASH.”

I didn’t experience any hiccups with logging in, email confirmations or any lag or glitches with the app thus far.

The only thing that I am waiting to see from the Zimbocash team now is an eCommerce payment API that will allow merchants to receive payments. It’s all well and good to trade peer-to-peer, but if ZASH is to compete with EcoCash and the banks it has to be widely available as well as being simple for merchants to integrate on their online platforms.

The only drawback of the Zimbocash app is that it is not zero-rated or data-free. We have, over the last year or so, seen banks and other institutions make their applications and websites data free to absorb the ever-increasing cost of data for the consumer. If Zimbocash is to be competitive as a payment method on the market it has to be sensitive to how its community can access the service.

That being said, a USSD trumps zero-rating, this was also something that the Zimbocash team talked about in the Twitter Space they held in September. Much like the app, they might be looking to play the USSD close to the chest till they have it up and running.