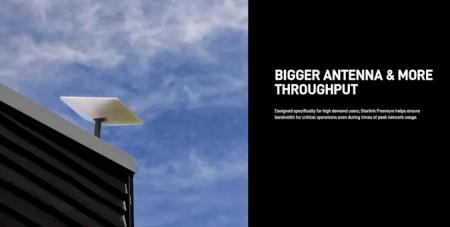 Elon Musk’s VSAT internet service provider Starlink announced a new high-performance tier called Starlink Premium according to a report by The Verge. The package sports a larger antenna that will reportedly get users between 150Mbps to 500Mbps with 20 to 40ms latency.

All of this doesn’t come cheap though because the package costs US$2,500 for the hardware and US$500 a month. This is quite the leap from the standard package which for just the satellite and other hardware costs exactly the same as the monthly package for Starlink Premium. However, the speeds are about half of what you’ll get compared to Starlink Premium.

But the price difference is mainly because it’s more of a business or enterprise offering targeted at offices and stores than the individual consumer. However, that won’t stop anyone with the money to pay the US$500 deposit to reserve the hardware which is said to start shipping in Q2 2022.

Is Starlink even worth it though?

Last year we reported that Starlink was taking orders from Zimbabweans on their website but as far as we were told then the ISP hadn’t yet registered with the Postal and Telecommunications Regulatory Authority (POTRAZ). Moreover, there were reports last year that the satellite constellation that Starlink had put up was still insufficient to cover the whole globe.

The folks over at The Verge tested the service out and said:

“Although it was fast, with speeds sometimes in excess of 100Mbps, we found that the connection would frequently slow down and drop out. It meant that using services like Zoom, or playing games online, weren’t really an option with the satellite-based internet service.”

However, that was in May of 2021 and since then there have been more satellites launched increasing the capabilities of the satellite-based service. I guess we will have to wait and hear from those lucky enough to test Starlink Premium out to know if it is worth the money.